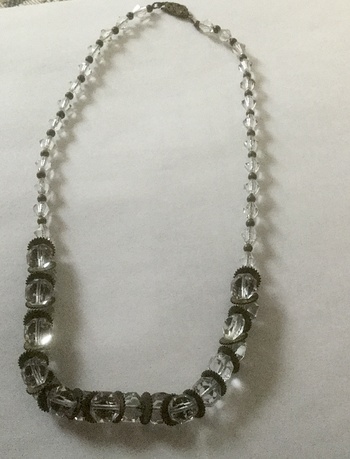 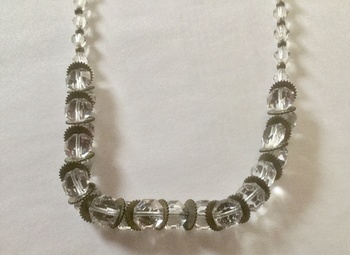 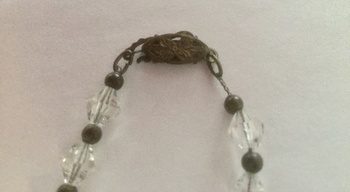 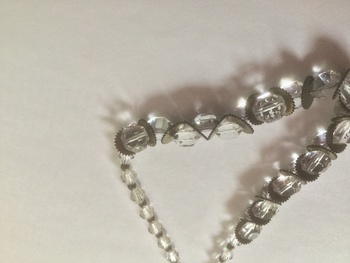 Well, just bought this last week because it was strange. Oddities are a challenge research-wise, but they keep me entertained. Plus, I’m partial to brass having spent a lot of my childhood helping my Dad polish buttons, bars, anything shiny on his uniforms when he was in the Army. I’m never without a can of Brasso.

So, when this came in the mail I was thrilled at the thought of pulling out the Brasso and polishing it up. Then decided not to. Rats!

The necklace measures about 15”. It’s heavy...whether that’s from the brass or crystals, I don’t know. It is strung on brass chain. It looks to me like old watch gears are used as spacers between the large crystals, while tiny brass beads are used between the small crystals. There are crystals on the front side and back side of the “gears” so there isn’t a front or back when putting on. The “gears” make an interesting frame for the crystals. The clasp has a small well-worn flower design on one side.

As for the crystals, I’m really not sure what they are. They aren’t lucite or plastic. There is a small chip in one of them. I have read about Rock Crystal being used in old jewelry but am not familiar with it. There was a person on Etsy who had a somewhat similar necklace who said it was 1930’s Czech glass. But again, I’m not an expert in that area either!

What do y’all think as to date and what the Crystal might be. Is there a way to identify cut rock crystal? I can spot Swarovski pretty well, and this isn’t it.

Thank you everybody for looking!