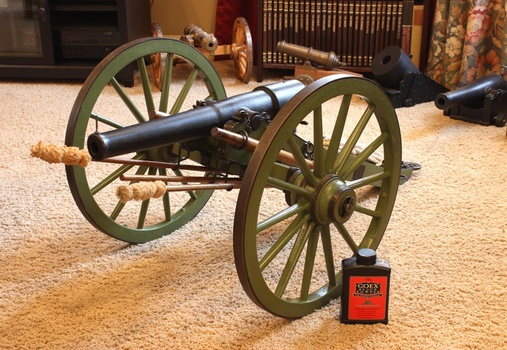 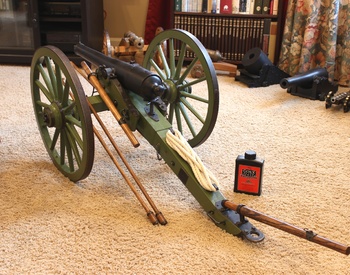 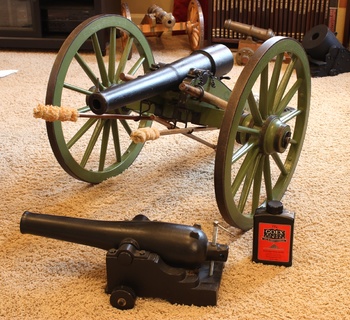 Here are some shots of my 1/3rd scale model 1861 Parrott rifle of the type used during the ACW. The red oak carriage and ironwork were done in the late 1970s by a gentleman in Washinton state who used to compete with it in small scale shooting events. I got it from his son who inherited it after his father passed on. The barrel is made of cast iron but has a seamless steel 1-inch bore liner. This was cast by South Bend replicas back then although the company is still in business and still offers this barrel.

The original 1861 Parrotts had a 2.9-inch bore so the bore on this model is almost to 1/3 scale. However, the 1861 Parrots were eventually replaced later in the war by the model 1863 which did have a 3-inch rifled bore. This was done so the Parrott could fire the same ammunition as the popular 3-inch ordnance rifle. While the bore sizes of two different Parrott models were clearly marked on the breech of each to prevent the use of the wrong ammunition, one can also tell the difference visually since the M1863 did away with the flare at the muzzle.

The Parrott gets a bad rap for safety during the war, but my study of the subject has revealed that barrel failures were mostly confined to the larger bore sizes and especially the larger 60 and 100 lb naval Parrotts. There are relatively few if any recorded instances of the 10 pounders failing (blowing up) in the field.

The last picture includes another scale cannon made by South Bend. That of an IX or 9-inch Dalhgen naval gun on a Marsilly deck carriage. It represents a 1/7th scale model of an original.

I have fired the Dahlgren on numerous occasions, but have not had a chance to shoot the Parrott yet. I hope to do so this summer on a friend's farm.