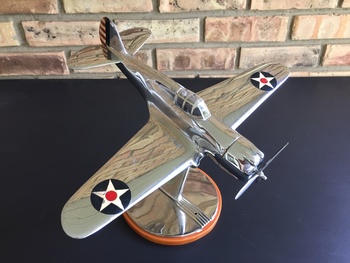 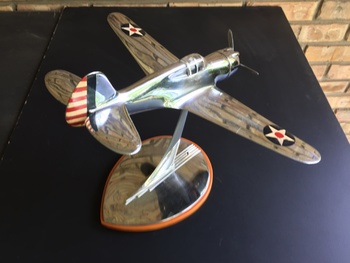 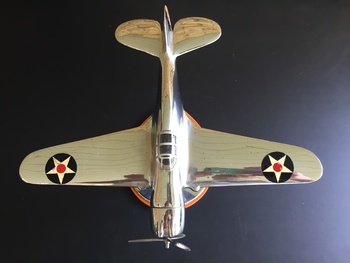 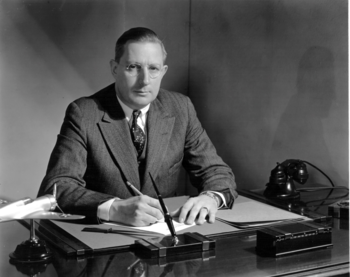 Only one of a handful produced, the Curtiss P-36A Hawk Chrome Desk Model was once used in the corporate boardroom of Curtiss Electric Propellers in Caldwell, NJ.
Dimensions: Wingspan Wingspan 14.0" x Overall Length 11" x overall Height to Top of Canopy 10.0" with mass of 6.50 pounds. Interesting to note that all the markings are original and professionally and painted.
The full-scale airplane was the brainchild of Donovan (Don) Berlin who was the chief aircraft designer for Curtiss for many years. In the 1930's Curtiss-Wright was the largest aircraft manufacturer in the United States with Airframes (Curtiss), Radial Aircraft Engines (Wright), Canopies and Propellers (Curtiss-Wright Electric Propeller). This model was designed to feature all of these products in one package. The last photo shows Don Berlin in a corporate portrait with the P-36's immediate precursor, the CW-75, sitting on his desk in the lower left corner. The P-36 was the first of many "Hawk" named fighter airplanes and it was one of just a handful of fighters to get airborne during the Japanese attack on Pearl Harbor with one appearing almost exactly like this desk model. A full-scale polished aluminum P-36A is on display at the United States Air Force Museum in Dayton, Ohio