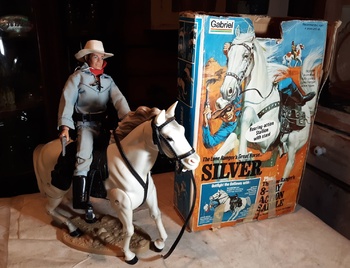 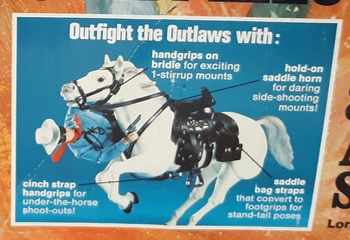 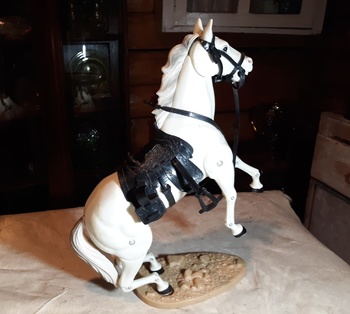 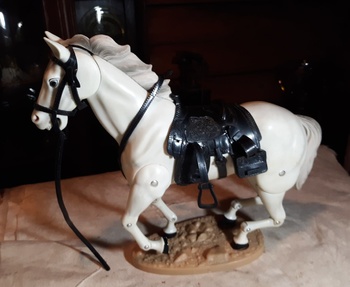 This was perhaps my beat find from a week of antiquing. It is the Gabriel Lone Ranger's Horse Silver with the 8-Way Saddle Box. See photo #2 for details about the 8-Way Saddle. I was told this was towards the end of the line for this toy line which was made in the 1970s. Not exactly sure when it was made, the toy line is still a bit obscure so there isn't as much information on it as for GI Joe. I actually have a pretty decent collection of these and I don't know all that much about them.
This is a 10" toy line which is a bit smaller than the 12" figures like GI Joe and Johnny West. It's a bout the same scale as Big Jim I believe.
One of the features of the Lone Ranger horses was the base and that the horse is articulated. . Thus the horse could do the Hi-Ho Silver thing. Marx made an articulated horse but it could barley stand up so the base is a very useful feature.
Got this also with a Lone Ranger figure although he is missing the mask. I have a spare around here somewhere. The figure is a free bonus at the price I paid. Main thing here was getting a good clean horse. The white color tends to get dirty and stained. This is probably the cleanest one I have seen in person.
Plenty more of this series for Show and Tell to come!