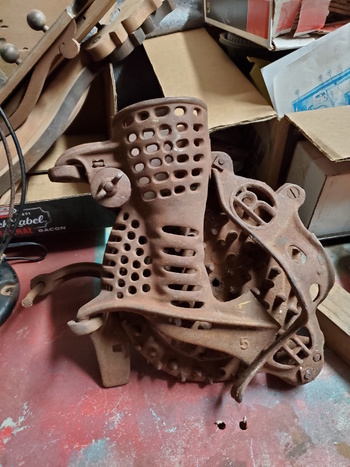 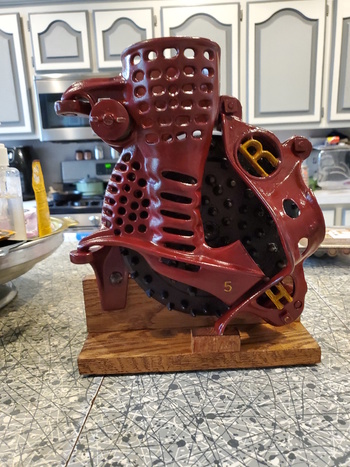 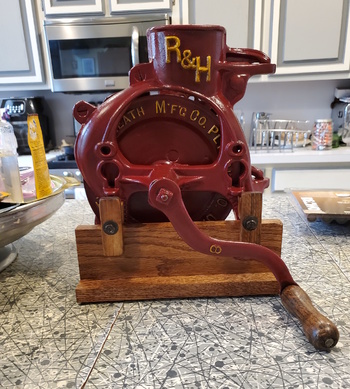 This is a hand-crank Root-Heath No. 5 Corn Sheller. The Root-Heath Manufacturing Company was formed in 1904 between George Root and his son-in-law Charles Heath. George Root had been in a manufacturing business with his brother earlier but when the business moved to Plymouth Ohio his brother did not join the relocation. The business was involved in building hardware items such as corn shellers, grist mills and lawn mower sharpening machines. A line of four hand corn shellers were produced. The top of the line was the R-H model, which was finished in red and gold, and had an advertised capacity of 14 to 16 bushels per hour. Since this sheller bears only the Root and Heath names, it was probably made between 1904 and 1919 when the company brought in another investor, J.D. Fate Co. The shellers could be mounted on the edge of a wooden box or barrel. The shelled corn fell into the container, while the cobs were ejected to the outside of the box. I have one "before" picture and then the two "after" pictures post my restoration. I hand-made the red oak stand it is mounted on for display purposes. All surfaces were cleaned and rust removed/cured and then sealed . I matched the Red and yellow/gold lettering as closes as possible to original description.