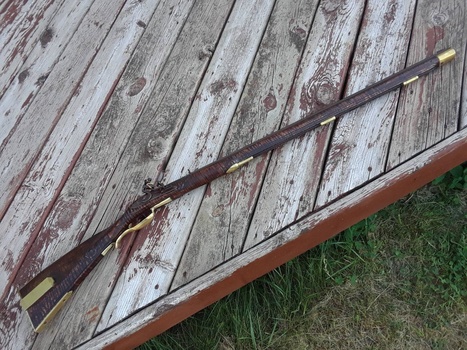 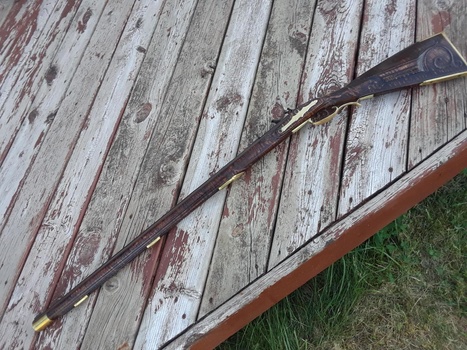 This rifle was started in the early 1980's, my father a Michigan Game Warden, myself and two other officers went bear hunting in the upper peninsula in the late fall of 1982 . I as a avid muzzle loading hunter, I had just finished my third rifle, also a flintlock of .50 caliber, and brought it along to hunt with. During the following week traipsing threw Baraga county, we managed to blow a brake line on the VW Van we took north. Back then you could fix these , as they were nothing more then a flared end on a copper line, all you needed was a flaring tool. So we bumbled into a old run down saw mill, out in the middle of bum-puck-no-where. They had a flaring tool we could borrow, and as I was under the van fixing the break line, my father who had started up a conversation with the owner was showing off my new flint rifle I had just finished. The owner of the mill stated that years ago a guy came in looking for tiger striped hard maple, and said if he was to find a piece to save it, as he would return to purchase it. The owner said the man never returned and it had been 6 years, so I ask if i could buy it, yes he said and for $20 it was mine. I started the gun that winter, and crushed my fingers in a work accident, and never finished it. I have carried it with me through 2 divorces, 6 house moves, ( each wife got a house ) and 5 kids. With the advent of the virus, I have had the opportunity to take the time to finish it. The rifle has early German Jager influences, I intend to finish off the patch box, with brass and bone. The 33 1/2'' Douglas straight octagon .50 caliber barrel, is fluted. A re-tooned L&R lock, I made the side plate and the ramrod flutes, and end cap. I would like to thank my good friend's Norm Brooks, and Dennis Pridy for their kindnesses and support, as to get off my ass and finish it . And to my father who found this block of wood, it is one of the finest pieces I have ever had, the curl is fantastic. A heirloom for our next generation's, and the memory's of my father and the hunt, priceless.