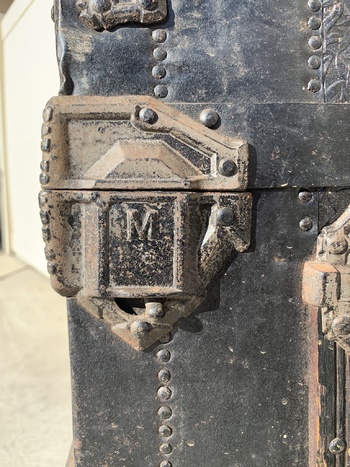 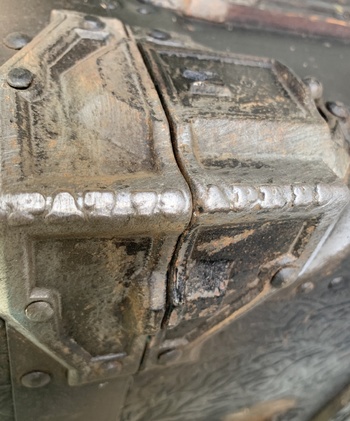 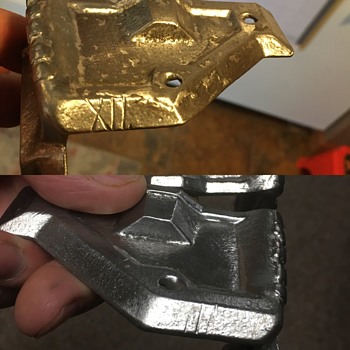 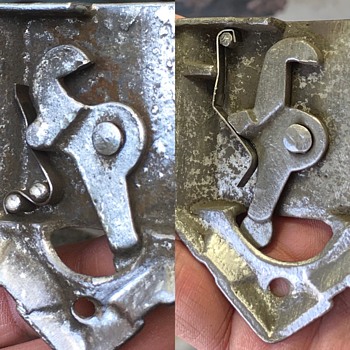 So as some of you have probably have seen, Brian (Greendog) recently found a MM in Ohio that had the very rare MM front corner latches. We talked about it and he snagged it pretty quickly as those corner latches are rare & it was a pretty unique trunk. The ensuing conversation on CW led Drill to post a photo of a similar trunk. I asked him about it, and discovered it was for sale in Texas. With Drill’s blessing I snagged it.

This is where it gets interesting. So as Brian cleaned up his trunk he noticed that both the latches had Roman numerals on them. One side of his had a XII on both top and bottom pieces. The other side had a III on both pieces. (Visible in the photos below).

He shared the photos with me and when I got my trunk I immediately looked for the Roman numerals. Neither side of mine had any Roman numbers anywhere.

On my trunk, one of my latches was pretty crisp in how it functioned and the other was very sloppy — I decided to remove the sloppy one to see if I could make it feel more crisp and in doing so I noticed something that really surprised me.

Brian’s latches and my latches look identical, and function identically. The latch movement is controlled by a piece of spring steel. But to my absolute surprise the mechanism of how the latches functioned were totally different!

Both Brian and I have wondered and speculated about why so few of these latches seem to exist. And also why the M design isn’t at all like like Martins other M’s.

Pure speculation, but the differences in mechanism design led us both to wonder if some of these corner latches were prototypes, and for whatever reason never made it into wide-spread production.

As shared by Drill, the original patent for these latches was dated the same as the ubiquitous rear MM hinges that we’ve all seen.

And as shown in the photos below, we can verify that the corner latches have the same patent date as the rear hinges — April 29th 1879.

These latches, however really look nothing like the drawings from the 1879 patent application. Drill discovered a second patent application from 1885. But the drawings can’t seem to be located. I wish we could find these drawings to see if they are indeed representative of the latches we have on our trunks. I’m afraid we may never know the whole story.

I am still pretty new to trunking, and have found CW to be immensely helpful! Greendog, Trunkman, Jim Cardoza, Drill and others have been so helpful!! It’s enjoyable to ponder, collect & restore these pieces of history! I hope some of you find this little part of the story interesting!