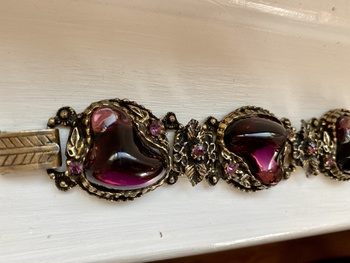 My best friend gave me this bracelet that belonged to her Aunt Pearl, who was a hairdresser in New York back in the 1940s. Aunt Pearl grew up somewhere in the middle of 16 children, in the middle of the Georgia mountains. The best Aunt Pearl story was her gassing up her car in Georgia to drive back to New York and telling the attendant to put five dollars worth of gas in her big Cadillac. Nothing would change her mind to put a pennies worth more than that five dollars into her tank LOL

Aunt Pearl always had the top of the line jewelry and the most fashionable. My BFF gave this to me because her tastes are very conventional and she knows I love costume jewelry: The more outré the better!

The stones, at first, I thought were glass because they were cold when I touched them to my lips. The metal wasn't. The temperature difference was extreme.

By the way, I hope everyone here is appreciative of this high-tech and highly secret testing method I have just shared with you! But I guess we expert testers must pass down our secrets sometimes I suppose… Right?

Anyway, I love how the stones are shaped. The purple crystals are also gorgeous but I don’t know how to tell what they are. I do know that with the ornate, high-end mechanical backing that this is a really, really nice piece and would love to know if anyone knows what it might be!

Also, Aunt Pearl apparently had tiny wrists. I, on the other hand, do not. I can wear it above my wrist bones but even then I’d worry without attaching a chain. Are there extensions that I could put on this that are better than a chain that would allow me to wear it on my wrist where it supposed to be worn? I don’t want to put any strain on it and possibly break it and even if the extension isn’t the most beautiful it doesn’t matter. All anyone will ever see is the bracelet! I just don’t want to put strain on any of the parts