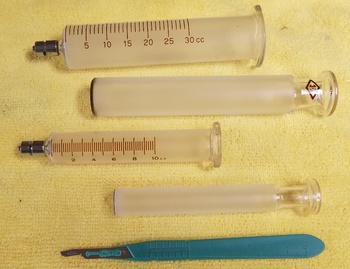 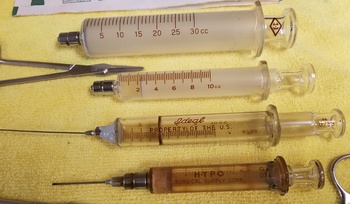 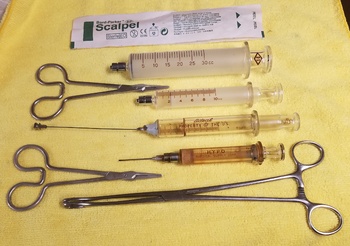 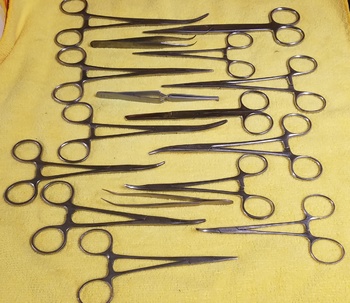 These are pieces that came out of Dad's work shop. You can see the two smaller syringes have oil and grease in them. Dad repaired Ham radios in the basement and used these to grease contacts with.

Dad's friend was a surgeon at the nearby Army hospital. he would bring dad leftover supplies and overstock inventory items.

Not sure how old these are But they've been in the basement for as long as I can remember. I've always been fascinated by the glass syringes and their alternate use. I do have a box of needles somewhere.

HISTORY
In 1853, a Scottish physician, Alexander Wood (1817-1884) developed a syringe with a needle. He was appointed Secretary of the Royal College of Physicians of Edinburgh in 1850. A French surgeon, Charles Gabriel Pravaz (1791-1853) of Lyon was making a similar syringe which quickly came into use in many surgeries under the name of The Pravaz Syringe. They both independently invented the hypodermic syringe. The very first use of the syringe was for injecting morphine as a painkiller.
Later, Benjamin A. Rubin invented the vaccination needle. This was a refinement to the conventional syringe needle. From 1949-50, Arthur E. Smith received 8 U.S. patents for a disposable syringe.

USE
Glass syringes are the most widely used in syringe pump applications. They are available in a variety of sizes including microliter volumes, enabling experiments with extremely small injection volumes. They generally have small volume errors (typically ~1%) and are thus ideal for high precision work. Additionally, glass syringes have a high gas barrier, which is good for oxygen-sensitive applications.