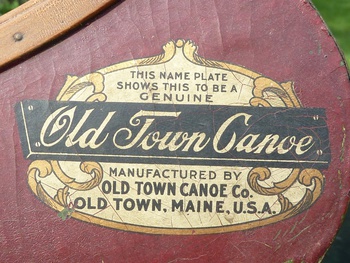 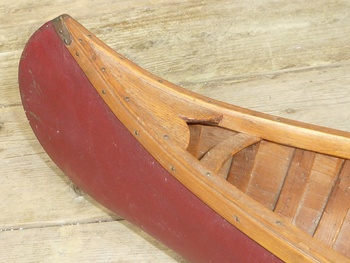 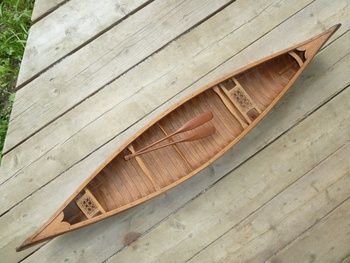 Very unique store display or salesman's sample model canoe combining elements of both the Carleton Canoe Co. and Old Town Canoe Co. At 42" long, this was built on a Carleton mould; it also displays typical 'heart-shaped' decks and short carry thwart, two distinctive Carleton features. However, its original 'palm green' paint by Carleton was later covered with Old Town red, and Old Town brand name lettering placed along its sides, as well as Old Town decals applied at the ends. The explanation: the two companies were competitors, and both were located in Old Town, ME. In 1910, Old Town bought out Carleton. Most likely, this was a display model prepared by Carleton just prior to the takeover, then changed to suit Old Town needs and purposes. Authenticity is unquestioned; the 'closed gunwale' style which was being phased out by 1910, lends credibility, as well as do all significant features of this piece. A truly unique example of canoe advertising memorabilia - a 'two-in-one', and the only such 'combination' display sample of its kind known to exist!

Note: While the public often refer to such smaller canoes as "salesman's samples", the term is really a misnomer in this case. These items were really meant for static store display - i.e., to be hung from walls and ceilings, or sit on counter tops, not for carrying about the countryside. Most were between 3' and 8' long, and not many were actually made. In Canada, early canoe factories made very few, perhaps no more than a handful each. In the US, some factories made a few, but others, such as Kennebec, made 60 recorded pieces, while Carleton probably made 20 or so, and Old Town likely made around 100, but no one can be completely certain of these totals. All-in-all, they are fairly rare items, of which fewer likely exist today than originally made. Do be wary of copies and outright fakes if you are shopping.