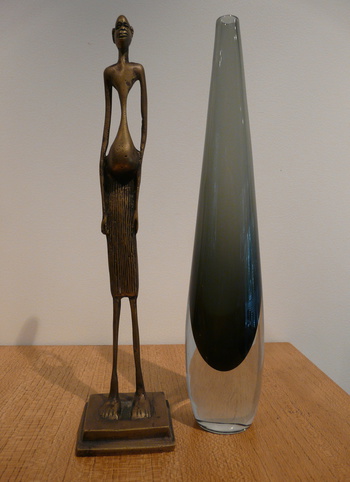 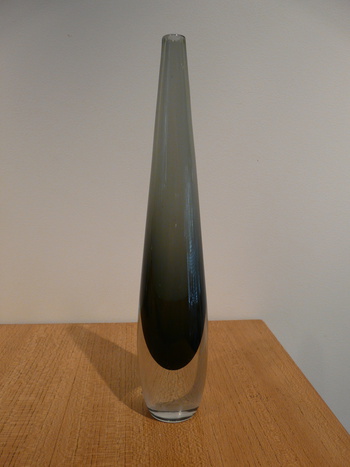 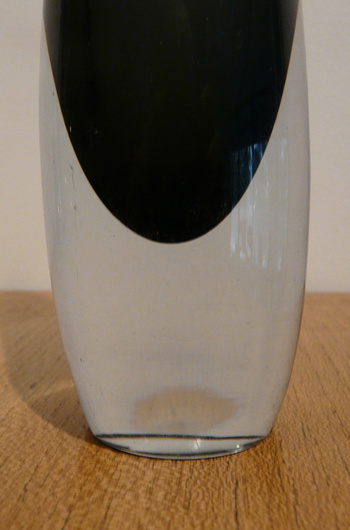 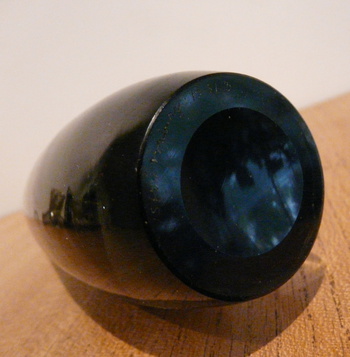 The design of this vase has captivated me for nearly twenty years now. The smoky grey fading towards the finely worked mouth. Everybody seems to love the clean lines and clear crystal of Strömberg.
The mark on this 'solifleur' vase reads Strömberg B963 in engraved needle point on the edge of the smooth ground pontil. This sommerso vase came in at least two colours: a smoky grey like this one and a pale brown too.
According to some sources it was designed by Gerda Strömberg in 1958. But this is a matter of dispute it seems and some others are suggesting that it is in fact a design by Gunnar Nylund, yet others say Asta Strömberg.
Gerda Strömberg (1887 - 1968) was the wife of the founder of Strömbergshyttan Edvard Strömberg. They took over an existing glassworks Lindefors in 1933 just at the end of the Great Depression. It is situated in the region of the Swedish province Småland, which is called the Kingdom of Crystal - located in Lessebo Municipality, midway between the central towns Hovmantorp and Lessebo.
Prior to this venture Edvard and Gerda had been working at other factories including an interesting period at the Eda glassworks in Värmland. Edvard had a thing about not signing glass: he saw a piece as being the result of a team effort rather than the brain-child of a particular designer. So the marks on their pieces are a matter of dispute when seen from a contemporary perspective with an interest on 'design' and 'designers'. This vase has the numbers B963 and it seems the B means simply = vas (Blomvas) 'flower vase' and the numbers are a design code that gives an indication of time period. The 963 puts it before 1963 according to a list given me by scandinavian_pieces. Thanks Amy!
The suggestion of the vase's design date as 1958 is plausible. What is less plausible for some is that Gerda would have designed the vase. Some suggest that she was less active at this stage at the factory at the age of 71. Gerda's daughter Asta is also known to have done some sommerso pieces which were called 'sputnik' at the factory. Now it's suggested she did not start designing until after 1960 when her husband died. The other suggestion is Gunnar Nyland who was part of the Strömberg team from 1954-1967 and was responsible for many of their sommerso pieces, it seems.

If anyone can give me any more information on this vase I'd be pleased to hear from them. It is a personal favourite and is part of my personal "top ten".

But then I probably should do what Edvard suggested and think about the entire team rather than just personalities! There are some secrets residing there at Strömbergshyttan.