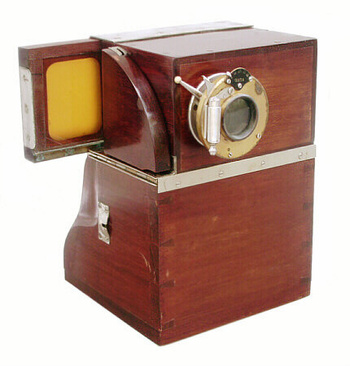 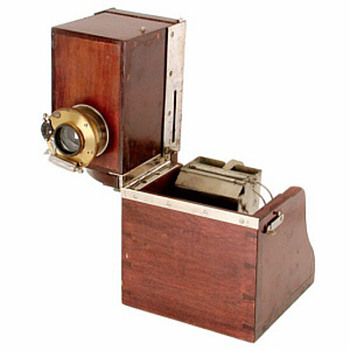 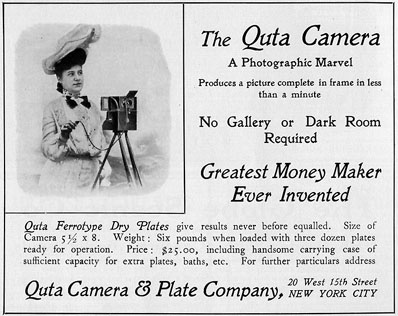 An amazing diversity of designs is another reason why I love early cameras.

Here is the Quta; a camera with a name as strange as its design. A c.1906 advertisement claims it; "Produces a complete picture in frame in less than a minute." Does this marketing slogan sound familiar? Maybe more so than you think. A little over forty years before Edwin Land's landmark announcement of a camera that made "A Finished Picture in 60 Seconds," a new style of camera-the tintype street camera-was rapidly changing how people viewed and accepted photography.

For a new breed of itinerant photographers, gallery quality images were not the desired goal. Instead, the objective was to make money by making pictures. The allure and excitement of being handed an image mere moments after the picture was taken, regardless of the image quality, kept people coming back for more.

Speed, portability and simplicity were common advertising themes even as we experience today:

"If there is one desire more than another which everybody has nowadays, it is the wish to go faster. Railways are increasing the speed of their trains, the steamboat lines are trying to hasten their steamers, and the same tendency is manifest in all other directions. The world is on the rush today. In photography, the "QUTA" is speed's top note."
- 1906 Quta pamphlet

Prospective Quta owners were also enticed by learning that the camera's portable size was ideal "for use at the seaside and other places of public resort, such as Fairs, Summer Resorts, Excursions, Lawn Parties, Exhibitions, Bazaars, etc." As far as operational simplicity; "A child can learn to operate it in two lessons, no previous knowledge whatever of photography being required."

It's unknown if the Quta Photo Machine lived up to the advertising hype. But regardless of its success or failure, this camera and others like it evoked feelings of excitement and anticipation while waiting to see a picture in less than 60 seconds; the same feelings we got with the old Polaroids and today with digital cameras.