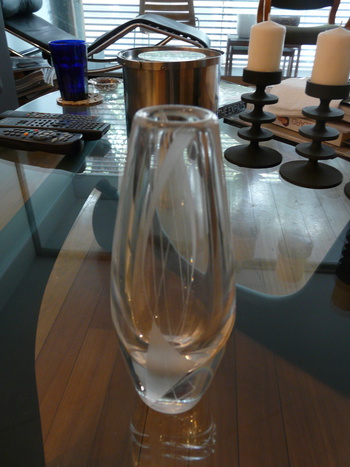 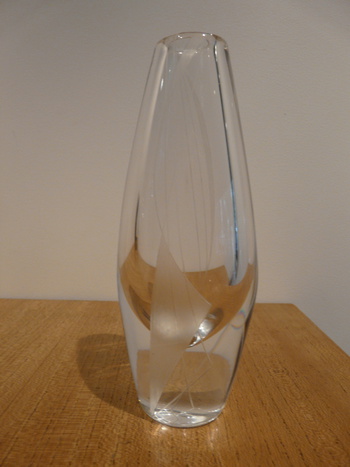 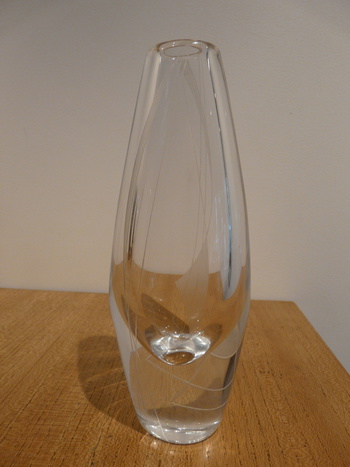 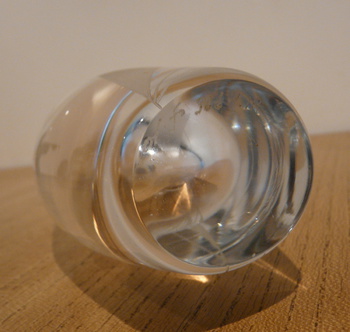 Marks on Orrefors can be a delight and they can be confusing too! Eye4beauty has had some questions about Orrefors signatures, so I thought I'd throw this vase into the argument. Its a vase that I found many moons ago on ebay. I really liked the engraving on the vase and saw that it related to other pieces by Palmqvist and Lindstrand's "Black Contour" series. The shape itself is very tactile and it fits nicely in the hand. It has a balance. The surface has been cut with these curved lines that follow the contour of the vase and add dimension to it. It reminds me of Constantin Brancusi's series of sculptures "Birds in Space".

There are two versions of this vase at modernistglass.com
"Engraving is not a simple skill. It requires artistic talent and lots and lots of practice. In terms of the time and skill put into the making of the glass, an engraved piece should generally be worth more than than an equivalent piece with no engraving. Of course, if the design is poor, the amount of work in making it is irrelevant.
Personally I find much of the Swedish engraved glass from the 20th century a little too kitsch - deer and kittens and horses and the like - and I think the market agrees with me. It therefore undervalues the genuinely good engraved designs like this. I do like this abstract Sven Palmqvist design. Mid-century chic."
http://www.modernistglass.com
They also mention that a larger vase has "a.s." after the design number. "In concentrating on the designers of glass it's easy to forget that the engravers and glassblowers are also artists. This piece has the code for the engraver (see the last photo). It's hard to read but it's probably "a.s." for Anders Svensson who was an engraver at Orrefors 1939-1981. It also has the code for the designer, Palmqvist (P). This piece is in the 1960 catalogue, Orrefors 28."

My vase is 20 cm or 7.9" tall .
I believe there are at least three different sizes and this is the middle version. Of course this one does not have the marks for Anders Svensson. Only by comparing with other pieces can you get any idea about the identity of the engraver. Access to catalogues would be a great help in identity as well.