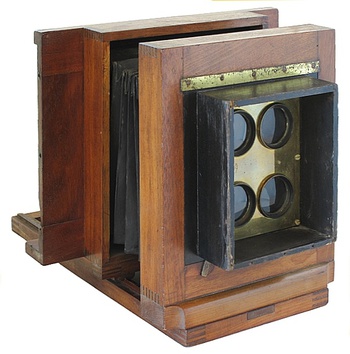 Lots and lots of Carte de Visite (CDV) images appear on Show & Tell; so I thought everyone (especially the image collectors) might want to see an example of an 1860s - 1870s style CDV camera.

The camera shown here is referred to as a 4-tube Multiplying Camera (American Unknown Maker - possibly Peck). It is definitely not portable and the heavy construction was meant to deal with the caustic collodion chemistry that invariably dripped on everything. Photographers could set up the camera with different lens combinations. Lens boards could hold anywhere from one lens to 16 'tubes' and sometimes more.

The 4-tube set shown here is standard configuration for CDVs or cabinet cards depending on the plate size. Higher numbers of lenses (i.e. 9 or 16) made smaller images called 'gems.' Lenses are mounted in simple brass tubes with the preferred petzval optical formula for portraits. Because lenses always had minor variations in focal length (keep in mind they were hand-ground), makers spent many hours matching the optics so that everything focused at the same plane.

For the setup shown here, four pictures were made at the same time on a single glass or tintype plate; however, some photographers crafted wooden 'flap shutters' to shoot stereo pairs (top pair / bottom pair). 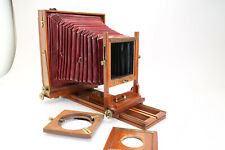 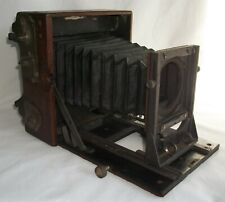