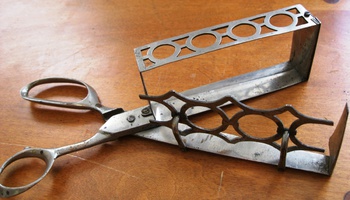 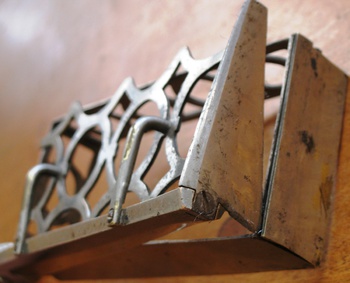 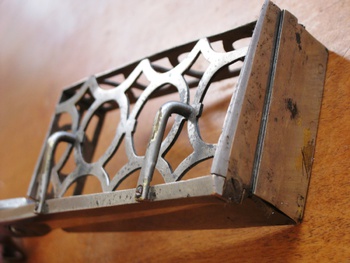 I found these 8.5" long scissors in an old New England barn recently and had to buy them so I could figure out their purpose. I have looked over every square inch of the scissor to find a marking that might aid in identification, but sadly the manufacturer has left me no clue (Arrgh, I hate when they do that!).
My best guess is that they are confectioner's, pastry or pasta chef scissors. My only other idea would be a Beekeepers scissors for cutting honeycomb for sale as a treat [As a boy, I used to buy small boxed honeycomb at the local fair. The comb was full of honey and just about the same size as these scissors would produce, and it made a great all-natural treat].
And, I'm sure if I gave these to a chef or beekeeper, they could probably find a way to make use of them. However, I'd love to know what the inventor had in mind when going through the trouble of designing them.
I believe that the detail and ornateness of the 2-piece "cage" attached to the left of the blades, and the fineness of the screws used to attach the "cage" and perpendicular blades, are both evidence that these were not the work of a tinkerer/inventer in a small workshop, but instead speak more to a mass produced scissor for common household/trade task.
I tested the scissors on a piece of paper to see if both the main scissor and the perpendicular pair at the end would cut a rectangular piece out of the sheet. When held near the bottom left corner of a sheet of paper, the main scissor cut 4" into the sheet, and then the perpendicular scissors cut 1.75" toward the left edge of the sheet, producing a 4" x 1.75" rectangular piece of paper which then dropped through the rectangular "cage" of the scissors to the countertop.
When I first observed these scissors, I thought the decorative "cage" on these scissors was designed to catch whatever was cut. However, when the scissors are held properly, with the thumb hole up and finger hole down, the "cage" has a top and no bottom. Therefore, it became obvious that the "cage" was not a means of collecting cutoffs, but rather a means of orienting scissor with the material for consistent cutoff shape/size, and also a means for forcing the material evenly downward in the direction of the blades during the cutting process. The top perpendicular blade at the end of the scissor is a single blade much like the top blade it is attached to. However, its cutting action is accomplished when it slides between two parallel blades attached perpendicularly and at the end of the bottom blade. My guess is that this is necessary to prevent the material from merely folding at the end as opposed to shearing, and is evidence perhaps that the material to be cut is soft/flexible/pliable as opposed to rigid.
That being said, I would be greatful if fellow members would be willing to post link(s) to information or images that would help me to definitively identify these scissors and their purpose.