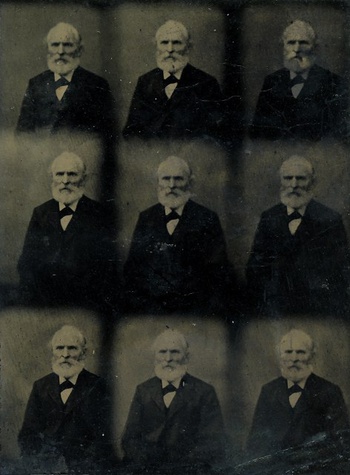 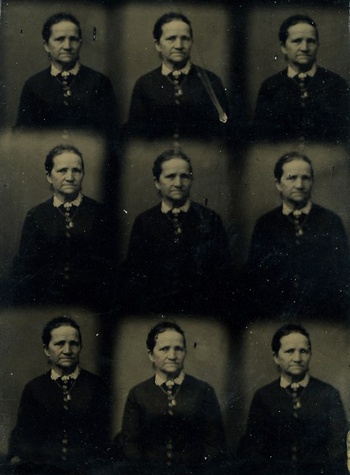 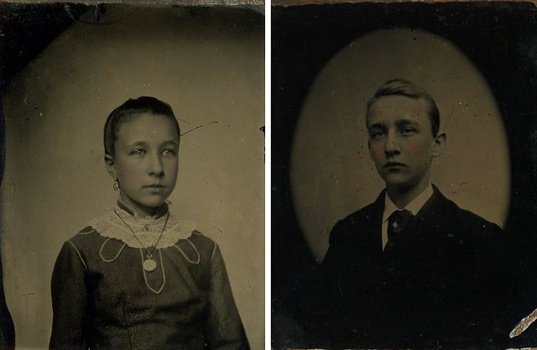 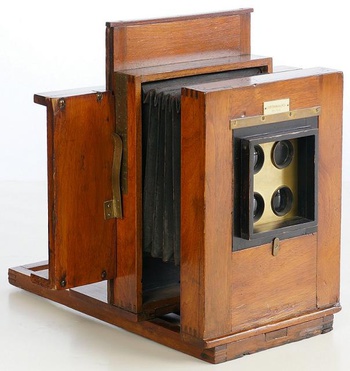 Pickers recently found this set of tintypes during a recent clean-out of a Brooklyn brownstone; the house was then sold and gutted. Uncut tintypes are rare as it is, yet finding a husband and wife set is a treasure. Then again, the kids shown with the parents (the single images) are believed to be their children because these images accompanied the two multi-image tintypes. (And is the girl wearing the same locket as the mom?)

We take a lot for granted these days. When shooting film (remember those days?), reprints were somewhat easy. Just take the negs to a Fotomat (if anyone remembers that business) or some other place. Digital is even easier. Copy the files or share via Instagram or similar. In the early days of photography before negatives, making copies of pictures simply wasn’t an easy option. The oldest processes produced one-off pictures that had to be reshot to make copies.

Imagine sitting in an early daguerrian, collodion, or tintype era studio anytime from the early 1840s to 1890s waiting your turn to be immortalized in silver. Looking around, you notice that the studio is reminiscent of a small torture chamber. The room itself is graced with ominous looking devices and specially built furniture with robust body restraints ensuring that the patron will be as motionless as a statue. In anticipation of sitting for one picture that could last anywhere from seconds to minutes, you begin to feel muscles cramp, even before being positioned into the studio’s head brace. Ahhh …. finished! The sitting felt like an eternity but worth it. But wait, your wife demands pictures for half the free world! If only there was an easier and less expensive way. Unfortunately the conveniences we now enjoy are over 120 years in the future.

The road to inexpensive multiple pictures involved changes to the picture taking process and photographic apparatus itself. A solution was first proposed and created by the Parisian photographer, Andre Adolphe Disderi who devised a way to make multiple images or portraits on a single plate. The plan called for a new type of camera with a shifting back. Each time the back was moved, a different portion of the plate was exposed, allowing several sets of images to be created at the same time. Some cameras used anywhere from 2 to 32 lenses while still others had both shifting backs and multiple lenses. These cameras soon were referred to as Multiplying Cameras and were very efficient at producing large numbers of images in a short period of time. Amazingly, a modified Southworth multiplying camera could produce up to 616 images on a 12” x 15” plate in five minutes! If cost was an issue, then really inexpensive tintypes were they way to go if quality didn’t matter.

The uncut tintypes shown here have the exact same individual image pattern from the camera’s internal partition; as such, the same studio camera made the husband’s and wife’s pictures. The overall size of each 9-image tintype is about 2-1/2 x 2-1/4 inches (actually a section of a larger plate) and the small ‘gem’ pictures are roughly 3/4” x 1”. These plates were then snipped apart and individual gem images were placed into a paper mounts or albums.

In summary, nearly all of those teeny, tiny images you see in individual paper mounts and albums started out as images on a larger multi-image plate. The family remains anonymous, but at least is still together after being saved from a gutted house.

Also shown is a camera in my collection capable of making this type of multi-image tintype.