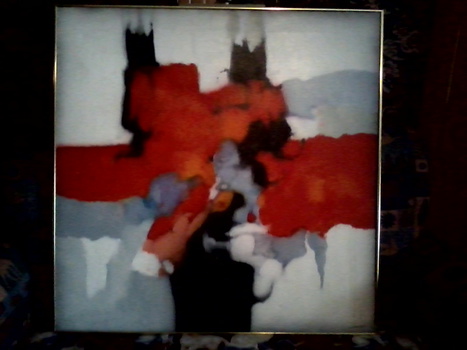 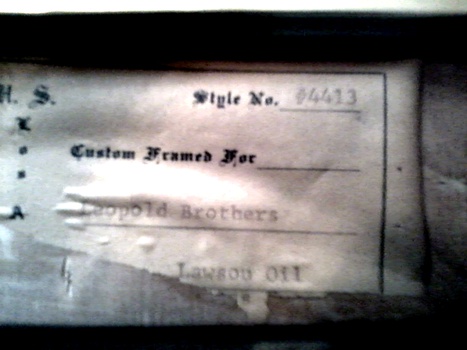 Another great find from our local "Goodwill". I saw this and thought maybe I should buy it but didn't at first (not a big abstract fan). Then I went home and thought about it and looked online and saw a couple of his works on Ebay. One was a "buy it" now for $2,200 ( I think this guy is overly optimistic)!! Another was $ 849.00 !! A few other auction sights were showing anywhere from $200.00 up to $ 4,500 ! You better believe I jumped back in the car and hoped it was still there ! It was. I really like it now...lol ! I checked the back it had a custom frame makers tag but sadly part of it was missing. Probably the title. It ended with Lawson oil.... it was brittle an torn on the last line. What it does say is it was custom framed (gold anodized aluminum) for " Leopold Bros." and it's numbered #4413 on the stretcher and tag. I believe it came from a furniture store here in Brecksville Ohio, they've been in business since 1859, although it's just Leopold's now.Probably was in their showroom in the 60's or 70's. I actually sent them an e-mail to see if my hunch is correct. We shall see. It measures 40" x 40 " in it's gold frame, but it's not the largest of his paintings that I've seen online. It's been bumped around a bit with dimples, light scratches and one tiny (1/4") puncture at the bottom. Darn Goodwill most likely because it looks recent. It still shows well and if it's worth the money I'll have it cleaned and repaired. Not too much about the artist except he was born in 1920 in New Orleans. Studied in New York and Paris around 1948. Don't even know if he's still alive. If so he'd be 93 ! -Mike-