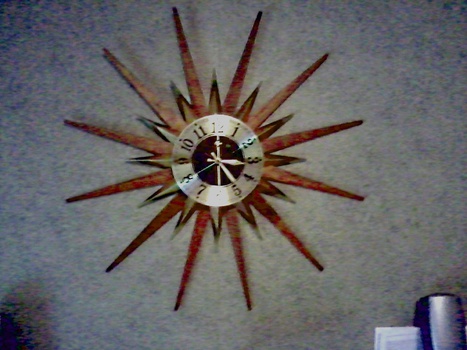 A quick trip to the "GW" this afternoon netted me this amazing Elgin clock. Beautiful retro style in the "Atomic " or "Eames" era style which ever you prefer. I've seen it described both ways. It's actually very light and delicate and sharp metal ! Easily damaged or scratched. The face had a couple nicks on the black areas and numbers, but a Sanford marker touched it right up. The walnut rays were a little faded. So I removed them ,they actually unclip and slide off. A little "Old English" and a coat of carnauba wax and they glowed like new. The other amazing thing is the brass rays still had their protective film on them. So they are basically like new! I think the movement was replaced but with the original hands. It's a black quartz movement and runs on a "AA"battery. The Elgin ones were clear and ran on "C" batteries. No matter it looks amazing and I've seen this same clock selling on ebay from $90-$320. The higher figure is with a replaced movement too but I think this guy's on crack...lol. -Mike-