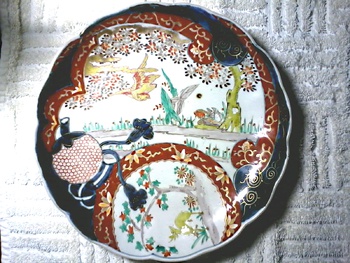 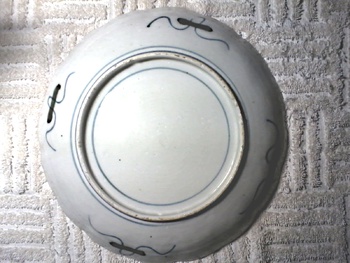 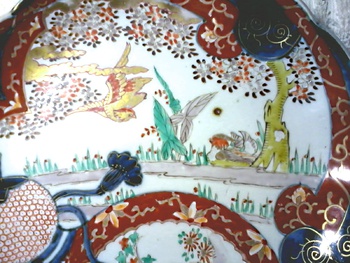 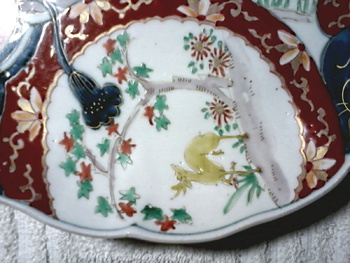 I found this 9 1/2" Japanese porcelain Arita ware "Imari" dish at Goodwill yesterday and it sure looks authentic. It's more of a shallow bowl than a plate. I've been reading up and it seems to meet all the criteria. It has rust spots, a bit warped, the rougher texture in the clay, the glaze pits and misses. Then again maybe it's got too many of the "hallmarks" of old porcelain. It could be a reproduction or an out right fake. I don't know, but it is beautiful and was inexpensive. Most of the gilt is missing from the edge except for a smidge left in one of the the scallops. There is a small 1/4" chip to the edge as well but it's on the back side and not visible from the front. No cracks though and it has the most beautiful long resonant ring when you tap it. Any Asian antique experts out there ?? -Mike-

Imari porcelain is the name for Japanese porcelain wares made in the town of Arita, in the former Hizen Province, northwestern Kyoshi. They were exported to Europe extensively from the port of Imari, Saga, between the second half of the 17th century and the first half of the 18th century. The Japanese as well as Europeans called them Imari. In Japanese, these porcelains are also known as Arita-yaki . Imari or Arita porcelain has been produced continuously until the present date.

Though there are many types of Imaris, Westerners conception of Imari in popular sense has association with only a type of Imari produced and exported in large quantity in mid-17th century. The type is called Kinrande. Kinrande Imari is colored porcelain with underglaze cobalt blue and overglaze red and gold. The color combination was not seen in China at that time. Traditional Ming dynasty color porcelain used dominantly red and green, probably due to scarcity of gold in China, whereas gold was abundant in Japan in those days. The subject matter of Imari is diverse, ranging from foliage and flowers to people, scenery and abstractions. Some Imari design structures such as kraakstyle were adopted from China, but most designs were uniquely Japanese owing to the rich Japanese tradition of paintings and costume design. The porcelain has a gritty texture on the bases, where it is not covered by glaze. There is also blue and white Imari. Kakiemon style Imari is another type of Imari, but it tends to be categorized separately in Europe.