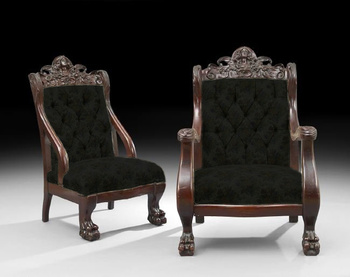 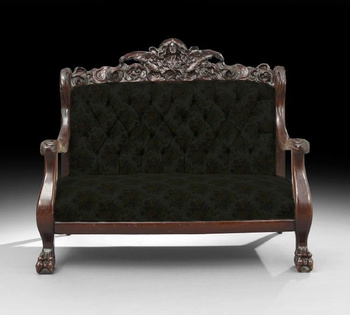 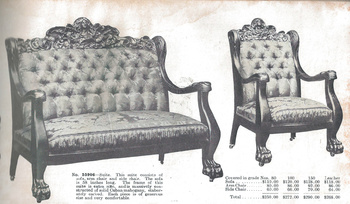 This set cost between $250-$290 in 1903 depending upon the fabric quality or leather (see picture #4; S. Karpen & Brothers 1903 Furniture Catalog). I'm not certain what that would be in modern cost, but I suspect this set was not seen at the time by many.

Karpen Furniture, Chicago. 1880-1952. Solomon Karpen, founder. (S. Karpen & Bros., Karpen Brothers). This Prussian-born cabinetmaker rose to become one of the leading furniture manufacturers in the United States, bringing all eight of his brothers into the business. They expanded into New York and California, selling every type and style of furniture, including Arts & Crafts.

After the Paris Exhibition of 1900, several American manufacturers including: S. Karpen Bros, George C. Flint & Co., and the Tobey Co., all of Chicago, and the Indianapolis Chair Mfg. Co., attempted to duplicate French Art Nouveau furniture but in simplified versions for a mass market and often with a mixture of styles, which belies the ambivalence that the manufacturers had for whether there was a domestic market for Art Nouveau style furniture.

By the time that the Art Nouveau style had hit the shores of America and the American public tastes, it was largely over as a movement in Europe. This, then, resulted in a very short period of American Art Nouveau furniture production, generally limited to a period between 1900 and 1905.

Karpen & Brothers, the largest upholstered furniture company at that time with upscale clientele that included a large contract with the US Government to outfit the Senate office building, produced a few tentative pieces of Art Nouveau furniture in a mixture of styles and then more successfully produced their Art Nouveau Catallya suite for exhibition at the 1904 St. Louis Exposition, which won honors. That 1904 Exposition set exhibits greatly different styling that melded Art Nouveau motifs with overall French Rococo gilded design. The suite above, however, is a earlier Karpen production that mixes the then familiar and popular late Victorian design (particularly the larger substantial proportions and pawed feet legs) with decidedly Art Nouveau carved crests.