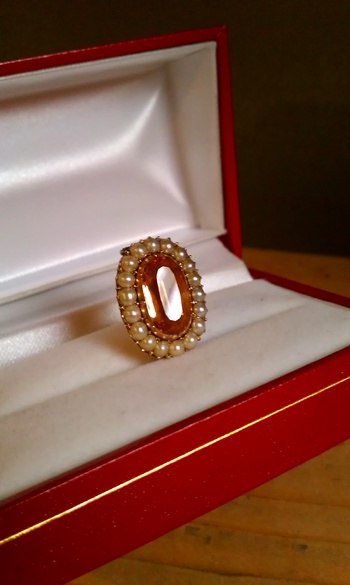 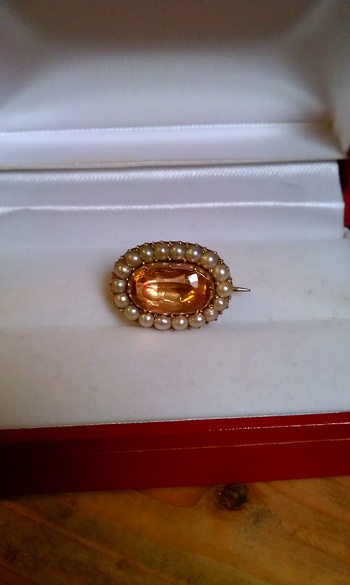 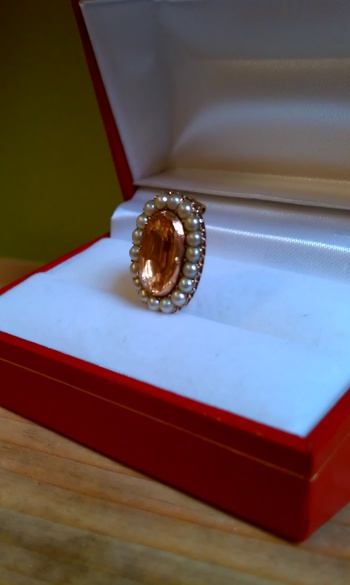 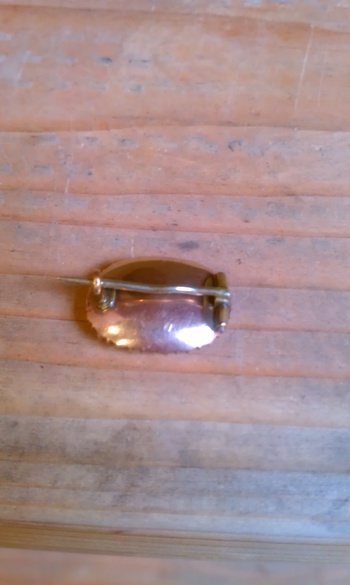 I wanted to share this lovely piece of historical jewelry that I found at the bottom of a box of costume jewelry! Awesome find Imust say. I knew right away that this was NOT costume jewelry. I wasn't sure at first what the stone was but after researching, I decided that I did not think it was Citrine and that it could quite possibly be an Imperial Topaz. I was so excited at the prospect of having a piece so rare in my possession that I knew I had to get it appraised. The first place I went to clearly didn't know what they were talking about. They said the pin wasn't that old and that it was a Citrine. I knew better so I took it to a much more credible auction house, "Clar's Auction House" in Berkeley, CA. and showed them the pin. Before they whisked it away, I told the woman what I thought the pin was and what era it was from. I told her I thought it was an Imperial Topaz and Seed Pearl Brooch from the Georgian Era. She then took the pin and I waited....... When she came back, her exact words to me were, "You definitely did your homework" She and 2 other appraisers confirmed exactly what I thought. The only thing I was incorrect about was the alloy. I thought it was rose gold but when tested, it did not come back with any gold content. I had heard of an alloy called "Pinchbeck" before, but it is quite rare so I never considered it. However, the appraisers all agreed that it was most likely just that, Pinchbeck. (see below for description of Pinchbeck I found on Wikipedia)

****Quite rare and not often seen in today’s marketplace, Pinchbeck is a metal alloy that consists of copper and zinc. Invented in the early 18th century the formula was a highly guarded secret. It was used in the 18th and into the mid 19th century as a respectable alternative to high carat gold. Many rolled gold and gold filled Victorian items are labeled Pinchbeck but are not the same. Today having the look and warmth of old gold, it is now highly collectible.****

I was told that the stone is an Oval Cut Imperial Topaz and that it is a "Type 1" Gemstone (which means these stones are usually free of inclusions) and that the "Clarity" in the "Type 1" group is classified as "VS" (minor included) The only thing I have to double check on is the Carat weight of the stone. It is pretty good size measuring approx. 1/4" x 1/2 " in diameter.

****The terms “Imperial” and “Precious” Topaz are often used to distinguish between true topaz and the quartz look-a likes. Topaz commonly occurs in colorless and brown colors, it is the rare golden, orange, pink, red and purple colors, which are often termed “Precious” or “Imperial” Topaz. This brooch falls under the "Imperial" Topaz category.

The pearls are genuine and are a gorgeous cream color. It has an intact and fully functional "C" clasp. The bar on the clasp appears to be a different color than the rest of the metal on the piece but I was told it is the "Original" bar to the clasp and that it did not appear to have been replaced.

This was certainly quite a "come up" in my book. I ended up selling this to a woman who collects Georgian Era jewelry as I knew she would treasure it and keep it safe.