Plotting a World Record, One Marker at a Time

Artist and graphic designer Allister Lee works out of his Studio B.I.B. in Toronto, where he makes commercial art for shoe and clothing companies like Nike, Stussy, Miskha, and Adidas. Because he only uses black markers in his art and advertising graphics (B.I.B. means “Black Is Beautiful”), he also happens to be amassing the world’s largest collection of black markers. While he has a small number of colored markers—including some of those fruit-scented Sanford Mr. Sketch markers—Lee does not collect them. He started with less than a dozen markers back in 2002, and now has close to 600. When he gets to 1,000, he plans to call “The Guinness Book of World Records.” 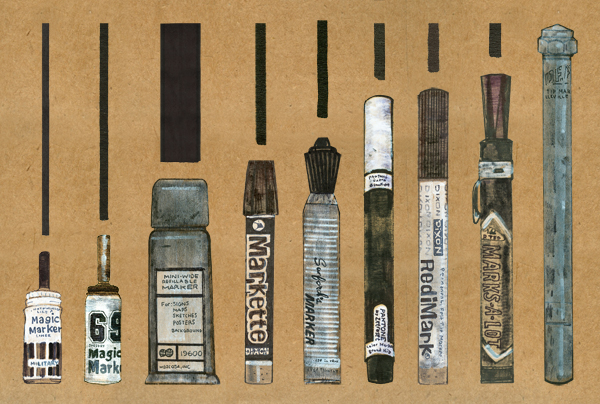 In addition to collecting black markers, Lee draws every one he acquires—eventually, he hopes to display 1,000 marker sketches in a “B.I.BLE” art show, and has even produced a poster (below) this year honoring the 500 mark, which is available at his B.I.Boutique. For Collectors Weekly, Lee so kindly created the unique artwork (above) showing nine of his vintage favorites, all from circa 1970s, including glass-barrel Magic Markers from the United States and England; a Japanese-made Mini-Wide popular with graffiti artists; and last but not least, his previous “holy grail”—the strange, metal, pipe-like Ideal Felt Tip. 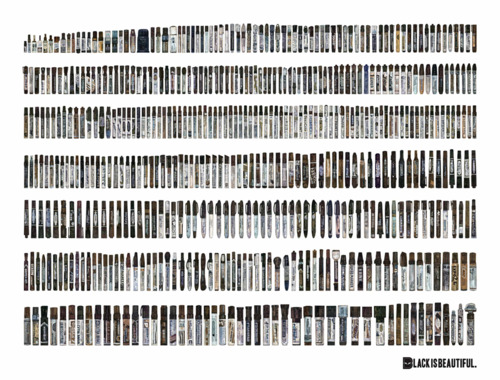 Recently, we spoke with Lee about how he developed this unique collection. 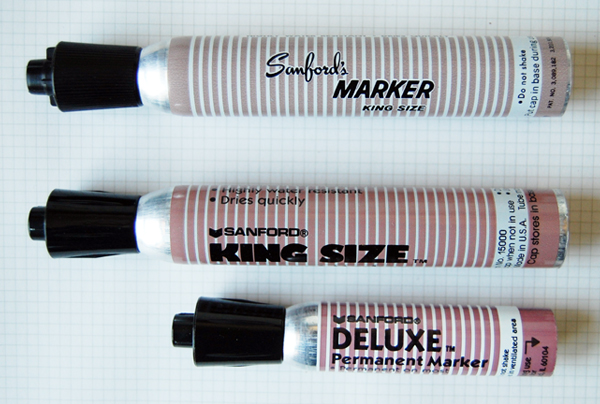 Lee: Everything I draw is with markers. Around 2002, I was using them for a lot of different projects—for example, I was doing life-scale drawings of Chinatown in London. So I already had the beginnings of a collection in a shoebox. It was probably only 10 markers.

It’s like any collection. I’m just some guy who draws, and then I keep my markers. It’s not a big commitment—a dollar here, $2 there.

Collectors Weekly: As an artist, have you ever gotten into pencils or pens—like Montblanc, Pelikan, Parker, fountain pens, or ballpoint? 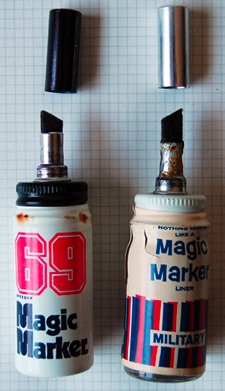 Lee: When I’d go to various antique markets in London and Paris, the price points of a lot of those older vintage collectible pens would be up in the hundreds. If I really wanted to be a serious pen collector and get certain numbers, I’d have to spend a lot of money.

The goal of my marker collection is to not treat it like such an exclusive, serious thing, but to spend the least money as I can for as many things.

That being said, I’m definitely into pens, too. I’m interested in the pen labels, in terms of graphics, and I’m interested in pen construction and design. I have some inkwells and pen ephemera, but I’m not financially committed to growing that side of the collection.

Collectors Weekly: Have you learned about the history of markers?

Lee: I try to. I have bit of a nerdy hobby of writing to marker companies. I’m usually asking for free samples, but I’m also interested in the company’s story. When I went to Hong Kong, I got excited about visiting the Zebra distributor, particularly when I walked in and realized, “Oh, wow, this is their little head office.” I’m always trying start up a dialogue with marker makers, but for the most part, they don’t really see themselves as interesting.

The most fascinating company I’ve researched is Ideal. They started out in 1919, making stencil machines, as well as other marking products. My friend bought one of those machines, called Diagraphs, which were often used for marking uniforms with your last name and your company during Vietnam and World War II. Do you remember those old tape-label makers—where you would punch the letters into black tape? It’s similar to that, but heavier, and it punches the stencils out of paper.

This vintage Ideal Felt Tip is my favorite marker because it seems to be my oldest one. Plus, it’s metal, it’s unused, and I got it from a friend. I’ve always known that it existed, and I see it on eBay all the time, but I try not to spend a lot of money online. I prefer to collect things by stumbling upon them or trading with friends.

These days, many markers just come in plastic bags. So I like the fact that this Ideal marker came in its own box. It’s impressive that this marker was elevated to that level of prestige, where the makers would say, “We’re going to do a full label, and then, we’re going to design and print a full four-sided box.” It makes for a nice little package.

It seems very industrial. The end is basically a hex bolt, right? I like how it’s stripped down to the bare essentials, which is why I like those glass-jar Magic Markers, too—you can see the moving parts. The Ideal Felt Tip seems like the product of a really unrefined way of making a marker. It’s as if some guy had a metal pipe, and added a screw insert and a hex bolt. Then, he put in a lot of felt, and that’s his marker. It’s pretty caveman.

Sometimes I can speculate how certain markers evolved. Those glass jar Magic Markers, I’m pretty sure their origin was the glass ink bottle. Someone probably said, “Here’s an inkwell. I’ll fill it and just throw the sponge on top, and that’s a marker.”

Collectors Weekly: The Mini-Wide is cool, too. It looks like a robot to me.

Lee: Yes, it looks like the “Black Hole” robot. They were obviously made for draftspeople, but everybody in the graffiti world started using them because of the thickness of the nib. Plus, you could make your own ink and throw that in there. That same company makes even bigger markers called Uni-Wides.

I’m pretty happy to have this vintage marker all clean—it hasn’t been used. You can tell it’s vintage in those little details, like having a metal cap. The way people made products back then, they were just a bit more considered and interesting.

Collector Weekly: I heard that this all started as a desire to get into “The Guinness Book of World Records.”

Lee: You know when you’re waiting at the dentist’s office, and they have “The Guinness Book of World Records” in the waiting room? I remember flipping through one around the same time I was starting my collection, I noticed that some guy held the record for owning the largest collection of cigarette rolling papers. So basically, he just went to a bunch of tobacco stores and bought rolling papers—which is cool, but I didn’t think it was extraordinary or in the realm of Guinness status. I was like, well, if that guy can make the Guinness Book, maybe I could, too, for collecting markers.

I haven’t applied yet. I know it sounds silly, but I still think I’m too young at 33. I don’t want to peak too early in my marker collecting achievements. It’s really not a serious, all-consuming mania, so I go at my own pace and invent my own rules. I make up my own criteria as I go along for what constitutes a marker. I don’t even know what the official guidelines would be, if there were to be a world record.

Yes, maybe when I hit 1,000 markers, I’ll say, okay, I’m ready to apply. I want to get a number where if someone else wants to beat it, it would take them a while. I feel like 1,000 would be untouchable.

It’s not as though I’m collecting classic cars or Fabergé eggs. But everybody has personal quirks, and you find yourself a creature of habit. Ten years ago, all my friends were starting to collect records and sneakers and toys, and they were all going on eBay.

At the time, I just didn’t have that money to spend. I felt that if I were going to have a collection, I would want to have the biggest and the best collection. So when I realized that I wouldn’t have that with more expensive things, I decided to collect something where maybe I would.

I don’t really think about markers all the time. I’m not going out of my way to find them. But if I’m out walking and I pass by a store, I might as well go in and then buy a marker. 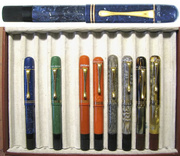 Mondo: The Monster of Modern Movie PostersPlaying With Matches: Sexy, Silly 1930s Ads That Went Up in Smoke