Flashback: The Similarity Between Ancient and Early American Glass

Share
This article, written by the then-Associate Curator of the American Wing of the Metropolitan Museum of Art, notes the Egyptian influence on ancient glass (especially in Rome), the origins of blown and pressed glass, and the similarities between ancient Egyptian glass and more modern American styles. It originally appeared in the August 1942 issue of American Collector magazine, a publication which ran from 1933-1948 and served antique collectors and dealers.

At this moment of writing Egypt’s most recent plague, under General Rommel, threatens Alexandria. The strategic value of his immediate objective, as a stepping stone to the East and as the sole adequate harbor remaining to the British Mediterranean fleet, is a matter of daily comment in the press. But the ancient city has tempted ambitious men for more varied reasons over the course of years.

Illustration I, I-A: Use of Overlay Decoration: Illustration I is of a fragment of a very old vase, origin and date of which are uncertain; and Illustration I-A, early 19th Century South Jersey type bowl. In both the glass making technique used for decorative effect was essentially the same.

In other days it served as the entrepôt for the harvests of Egyptian grain; it harbored the Nile-borne traffic of Arabia, India, Somaliland, and Ethiopia; it offered the diverse products of Alexandrian manufactories; and, to be sure, Cleopatra lived there.

When Caesar and Antony dallied in Alexandria — and for many years before and after — it was the industrial city “par excellence” of the day. The Roman world was flooded with the better manufactured articles of Alexandrian industry — textiles, leather goods, papyrus, artistic metalwork, and, not least, glassware. Expensive, multi-colored glass as well as cheaper bottles, imitation stones and gems, glass paste, and other articles were fed to markets that reached all the way to China.

The Roman empire apparently preferred Alexandrian glass or, rather, Egyptian-type glass, and imitated its manufacture wherever local industry was able to do it. Those who know best are very chary about attributing or dating such ancient glass. Collectors speak in terms of categories as cautiously as American collectors do with their Stiegel and South Jersey types. 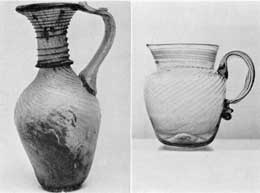 Illustration II, II-A: Pattern Molded with Applied Threads: Illustration II probably made at Alexandria. 2nd to 5th Century A.D. Illustration II-A, mid-western type pitcher, circa 1825. Both pieces were pattern molded and then had the decorative threads of glass plastically applied.

Alexandrian glass can only be considered as such a rough classification. The city was not without serious competition, notably from Sidon. Indeed, according to Pliny’s well-known story, glass was first discovered in this latter region and its craftsmen may well have tutored Egypt and later, Europe. The close commercial and social relationships between the two sections, and the consequent interchange of technical workers, was long and constant. Itinerant glassblowers, then as in later America and in all times, endlessly roamed the country to the further confusion of today’s collectors. But, whatever the precise local influences may have been, the prestige of Eastern glass in general gave a common character to the glass industry throughout the Roman empire.

Shapes unearthed in Karanis, Egypt, are matched by shapes discovered in the Rhineland. A barrel bottle found in Kent, England, in 1869 (almost identical with illustration IX), bears the mark of Fontinus and Sons, apparently a dynasty of Syrian glassblowers who, by the third century, were established in Picardy. 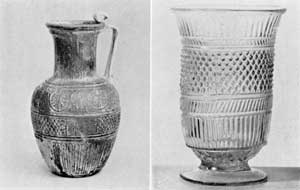 Juvenal describes a timeless sort of apparition — a Roman beauty so plastered with ointments, unguents, pomades, perfumes, and essences of all sorts, that you could hardly tell whether it was a face or a scented plaster that you beheld. The glass vessels in which these embellishments were purveyed carried not only aids to beauty but glass styles as well wherever ladies and gentlemen followed fashion; practically everywhere in short.

Unless by sonic tragic mischance Rommel’s artillery unearths them, the glasshouse sites of Alexandria are not likely to be available for archaeologists very soon. The modern city is largely built directly over the ancient one and excavations are not possible to any great extent. But unless or until such diggings are made the origin of the blowpipe in glass manufacture may ever remain a moot point.

Present evidence favors the Syrians as the inventors of this revolutionary tool and technique for handling glass. In any case, their glass seems to have been more typically inflational than was the characteristic glass of Egypt, and the earlier examples of blown glass are attributed to Sidon.

Before that invention glass, usually highly and variously colored, had been modeled about a sand core which was subsequently removed, or manually pressed into shallow molded forms. But, wherever it was invented, the blowpipe was quickly adopted throughout the Mediterranean world as a great stimulus to the glass trade. Production was probably stepped up enormously. 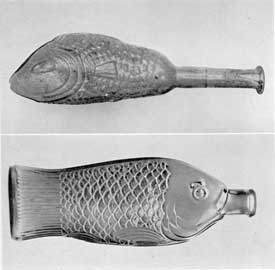 Illustration V (top), V-A (bottom): Two Fish Shaped Flasks: Illustration V, a mold blown one of the 2nd or 3rd Century; Illustration V-A, American flask made after 1850. Both are naturalistic in form and were made by mold blowing.

The world had to wait about 2,000 years for the next significant development in glass manufacture. Then, little more than a century ago, America perfected the mechanical glass pressing machine. This also changed not only the nature but the economy of glass production to a considerable extent. But for the preceding fifteen or twenty centuries practically everything done by glass craftsmen had already been practiced or envisaged by the ancients.

Almost every technique known to the early glasshouses of America was long ago familiar to the workmen at Alexandria, Sidon, and other centers of production in the Roman world. Applying loops and threads of glass plastically to free-blown forms (illustrations I and II), crimping (illustration I), expanding forms after delivery from small pattern molds, and using full-size or three part molds (illustrations III, IV, V and IX). All these tricks familiar to students of our own early glass had precedents several thousand years ago. Cutting, engraving, and enameling were decorative treatments also common to both places and times.

It is interesting that at the time America was giving its cities such names as Rome, Carthage, Alexandria, and so forth, American glasshouses were producing wares which often show startling resemblances to the glass known and used in the ancient cities of those names during the first five centuries of our era. That it was not done in the same spirit of conscious emulation that inspired our classical revival architecture is clear. Roman glass, unlike Roman architecture, was practically unknown to our earlier glassblowers and could hardly have been copied. 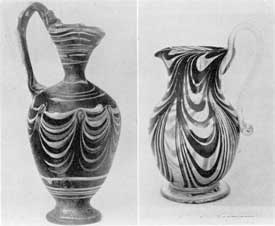 The similarities are to a degree explained by the reliance on the same fundamental methods in both cases. If unimpeded, a molten glass bubble grew at the end of a blowpipe quite the same in the 17-19th centuries as it did in Caesar’s time. Thus it is hardly surprising that the wine bottles that were made this same way in both periods should look alike — squat, onion-shaped, and with a long, tapering neck. The same inherent tendency of the blown metal to assume a globular shape is apparent in bowls of both eras (illustration VI and VI-A). Then, too, there is a core of essential human needs that do not change from generation to generation and that can be served by the same essential forms.

At times the forms may be quite dissimilar, due to tooling, yet the decorative techniques provide a superficial but striking link between groups from each period. The looped bicolored striations of some (illustration VII) or the graduated swirled ribbings of expanded mold patterns (illustration II) of other ancient types strike a common note across the ages with early American South Jersey and Mid-Western types, despite the disparate shapes they may feature. 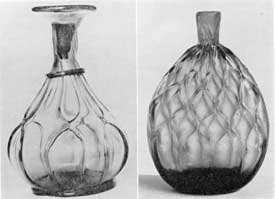 The revival of full-size, carved molds in several sections (the American collector’s “three-mold” types) presents the most curious parallels of all. Here all three factors — technique, shape, and decorative treatment — have unexpectedly close affinities. The training of a son by his father, and the handing down of trade secrets and traditions through many successive generations has always been a basic factor in good glassmanship.

Apparently, though, mold-blown glass of this sort had been forgotten or neglected for many hundreds of years at the time it was revived, principally but not first in America, during the early 1800’s. Why an ancient craft tradition so long dormant should have been so suddenly reborn, and reborn so closely in the image of classical examples, is a provocative question.

It has been suggested that in this case some Syrian prototype, unexpectedly found, must have served as a model to inspire the revival. Yet it seems almost enough to observe that the technique is quite a simple one, hardly beyond the imagination of a glassworker faced with the need of quickly reproducing uniform shapes in a cheap and easy manner. 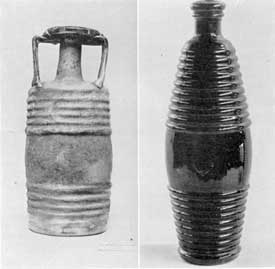 For similar utilitarian reasons both Romans and the later Western world evolved cylindrical and square vessels that could be more easily transported and stored than those of the calabash type. Such mold-blowing might just as well have been a matter of spontaneous generation as an archaeological rediscovery; although admittedly that hardly explains the similarities in shapes and patterns not infrequently found in this category.

American collectors are familiar with a group of “two-mold” flasks and bottles blown in rather eccentric shapes — log cabins, human heads and figures, barrels and fishes (illustrations V-A and VI-A). Here again the ancient glassblower and the ancient mold-carver anticipated his American follower by illustrations V and IX.

In both periods sales appeal was the primary factor conditioning these odd, somewhat unbottle-like forms, and the similarities presuppose some common response on the part of buying publics separated by well over a thousand years of history. It is just possible that, quite aside from the necessities of techniques and materials, these resemblances in glass depend upon some purely human factors that linked ancient Alexandrians with our own recent ancestors. Certainly some such common human force links embattled Alexandria and America today.