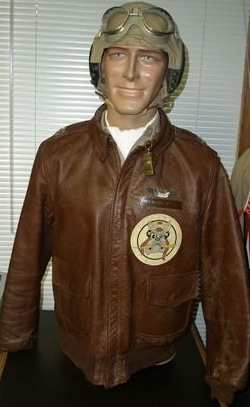 On one sunny California morning, my sister-in-law called from a garage sale, thinking I’d be be interested in a bunch of old license plates and possibly a typewriter. I wasn’t too excited about the typewriter, but the promise of the California-issued tags prompted me to drive 20 miles to this sale. I wasn’t disappointed. Indeed, there were 31 license plates from 1919 to 1956.

Even better, though: After looking through several more boxes, I pulled out a leather jacket and read the tag on the inside. “Type A-2, Drawing NO. 30-1415, contract W535-AC-23383, Property Air Force U.S. Army.” I ask the woman there to whom the jacket had belonged, and she said her late husband, who had been a pilot during WWII. She wrote down his name for me, and I drove away with 31 California license plates and one A-2 leather jacket. 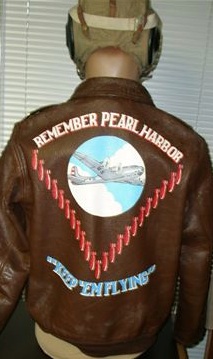 Not knowing much about the Army Air Corps flight jackets, I did some research. It turns out, the A-2 was adopted by the Army Air Corps on May 9, 1931, replacing the Air Corps 1927 A-1 button-down jacket. The new A-2 horsehide leather summer flying jacket was a instant success with the introduction of a heavy-duty zipper, a more fashionable shirt-style collar, slightly larger pockets, and its new seal-brown color. The pilots adorned these jackets with their squadron patch and leather name tag on the left side of the chest. On the back would be a painted bomber’s group name with a painted bomb for each mission they flew.

In 1942, the A-2 was canceled during a time when the Army Air Corps had to increase the number of pilots they trained from 300 a year to 30,000. There was a shortage of horse hides, and the leather tended to stiffen in cold weather. In 1943, The A-2 was replaced with the B-10, which had an outer shell of olive-drab cotton twill (gabardine)—which was wind- and moisture-repellent—an inner layer made of alpaca and wool pile. Because of this short 10-year shelf life, it turns out the A-2 is a very collectible leather flight jacket.