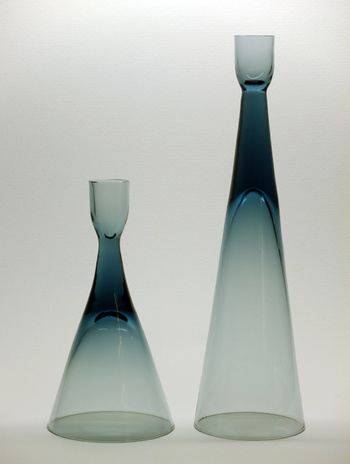 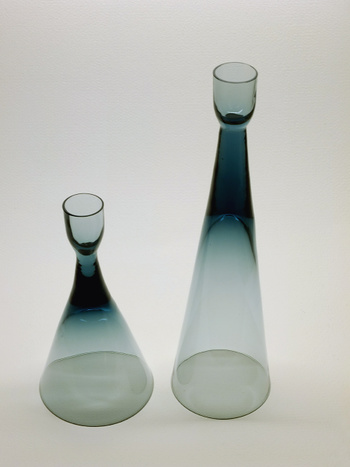 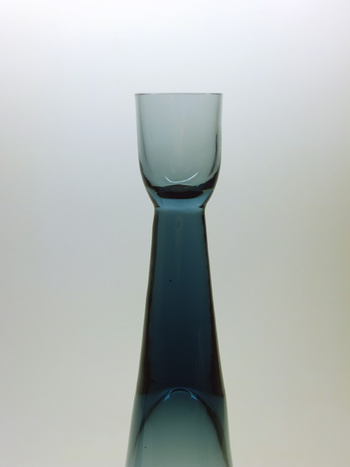 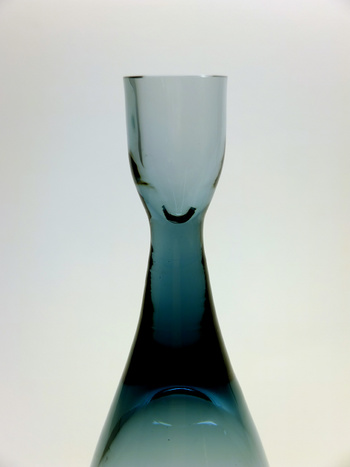 Finally I found these candlesticks. Saw them first in cobaltobolds post here: http://www.collectorsweekly.com/stories/83426-bengt-edenfalk-candleholders-for-skruf
... and fell for them instantly. I like the simple and clean design (which is typical even for today Skruf) and the stylish blue color. The lower model here is wider in the bottom, 8,8 cm. The higher is 7,5 cm in the bottom. Height for the lower is 16,7 cm, for the higher 26,5 cm. The designer is Bengt Edenfalk (probably from 1960s), who worked for Skruf 1952 - 1978. He was their first real artist designer. Edenfalk also worked for Kosta 1978-89, and later collaborations with Studioglas Strömbergshyttan and Wilke Adolfssons Studioglass in Orrefors.

The glassworks Skruf, Gullaskruf, Åseda and Björkhult formed in 1973 a sales collaboration to increase exports. In 1975 they formed together with Målerås Glassworks "Royal Krona", which went bankrupt after 2 years. 1978 Skruf was bought by Kosta Boda AB, but was closed down by them in 1980. In connection with this, the Ljuders hembygdsförening take over a large amount of glass of the mill's production, which laid the foundation for the fine glass museum available today in Skruf.

1981 Skrufs Glassworks is restarted by four glass worker who takes over. Ingegerd Råman (recruited from Johansfors and who later 2000-2010 will work for Orrefors) was hired as a designer and put her stamp on Skrufs products, with a simple and clean design in clear crystal. Today, when Orrefors is closed down, Råman is engaged again. Now the glassworks is owned and operated of Kent Elm with family. Other designers for Skruf today is Sofia Bergman, Karin Elvy and Matilda Ringnér. New Skruf has focused on female designers. Even the masterblower is a woman, named Cecilia Knudsen.