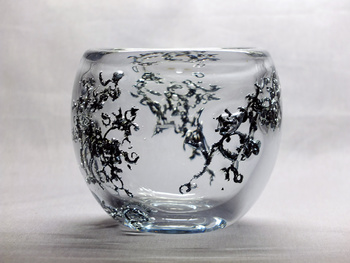 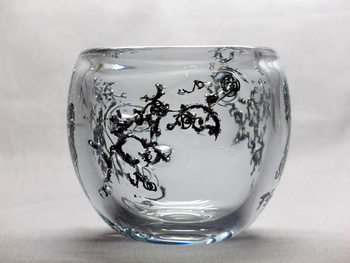 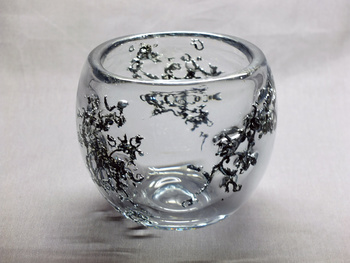 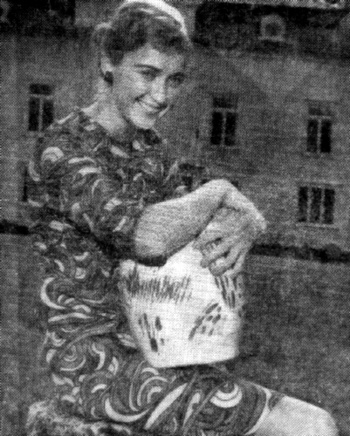 Kristina Kuylenstierna , born 1944- , was a short period around 1967-70 designers at Strömbergshyttans glassworks. Among the things she designed, I have seen paper weights in square format with color decorations, paperweights/sculptures in clear glass with pyramid shape and a bowl of enclosed decoration of iron filings in swirling shapes. The bowl has about 15 mm thick walls and driven edge . It is about 130 mm high and measures about 160 mm in diameter at its widest point. Signed on the bottom: " Strömbergsh . K. Kuylenstierna ". I think it's very beautiful to look at in the lighting. Too bad you have not seen many of her creations. Kuylenstiernas design for Strömbergshyttan are probably pretty anonymous .

Personally, I have no memory of her from my teenage years in the late 1960s , but I was not so interested in who designed the glass for the mill in that age either. So probably she passed by fairly unnoticed. I was quite often in the glassworks blowing and grinding process, and joked with the glass workers. But the designers were not daily and hourly there, but only for short sessions when the models was test manufactured .

Kuylenstierna stayed not long at Strömbergshyttan. She was also a time of Lindshammars glassworks, but if it was before or after Strömbergshyttan I have no information about. It was probably after Strömbergshyttan because she there was only about 23-26 years old. Among the things she designed for Lindshammar I have seen a chess set in blue and clear glass which is incredibly good, and a vase in the "PO Ström - style" in white with flowers in a green simple pattern on the bottom (label with " Lindshammar Kuylenstierna " were on vase ). Kuylenstierna seems then to have been involved in ceramic design business and trade in handicrafts (also glass) via a few different own companies.