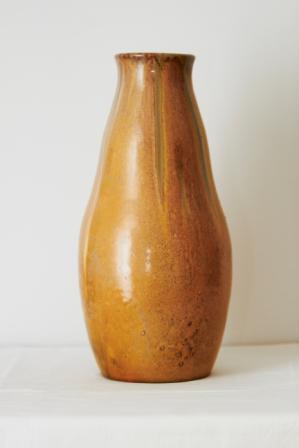 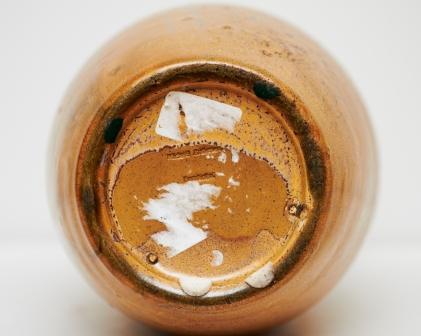 A few Michael Andersen pieces have been posted here, so I thought I’d add one more! Here’s a large stoneware vase manufactured at the Michael Andersen Pottery (est. in the late 18th century) sometime between ca. 1900 and 1916. With a height of 38 cm (15 in.) I guess it almost qualifies as a floor vase! Moreover, it is quite heavy (4.5 kilos/9 lbs!). This vase is actually a bit of a conundrum – not only is it quite unusual for a Michael Andersen vase, stylistically, it was also made before the Pottery is known to have produced stoneware. The vase was definitely made before 1916 and in that year a German engineer named Brück was hired to start a production of stoneware, but the kilns were not suited for it and it was only later Michael Andersen started producing stoneware. I can’t help wondering if the Pottery got a little help from the nearby Hjorth Pottery (a few hundred yards away) which not only had suitable kilns, but also its own clay pit (the island of Bornholm is the only place in Denmark with clay suitable for stoneware, and Hjorth produced the first Danish stoneware in 1902). Be that as it may – I love the yellow glaze on this vase!

The vase carries a stamped ’Michael Andersen, Denmark’. This was the mark used from ca. 1900 to 1916. Before that the pottery carried the same mark, but in Gothic lettering. Between 1916 and ca. 1930 ’MA&S’ (’Michael Andersen and Sons’) was used, and after 1930 three herrings in a triangle (the coat of arms of the town Roenne).