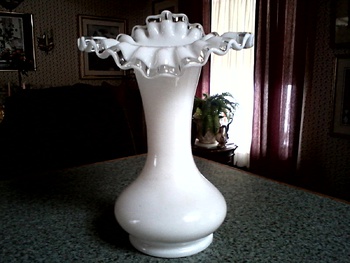 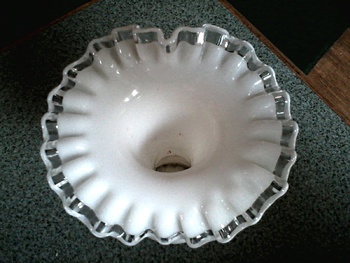 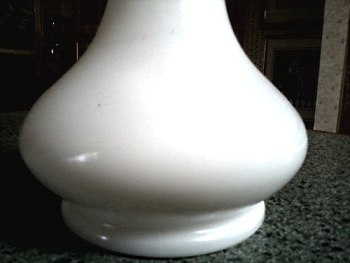 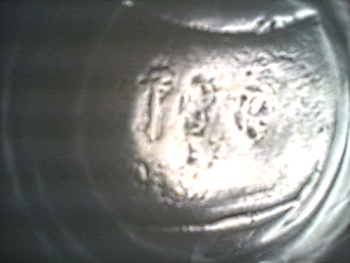 This is the last of today's finds. An 8 1/2" milk glass ruffle top vase with a bit of a JIP look to the top. I know there's a lot of Fenton similar to this but the JIP ruffle with the extra edging in white doesn't look like the usual Fenton pieces, which are clear to the edge. There is a mark on the bottom that is just too faint to make out. Doesn't look like a typical Fenton mark unless it's very early. Can't really make out anything. Maybe what looks like ___& ____ and some other smaller letters or numbers.Also appears to be on a shield background . -Mike-

NOTE : OK this appears to be Fenton after all. This piece is a "Crystal Crest" prototype piece with the extra milk glass edge. Made for a very short period of time. They removed it and the all clear edge was called "Silver Crest" in 1942. So this is the better and rarer piece ! -Mike-

Their "Crest" line of the 1940's, also known as "petticoat glass", its ruffles of clear and/or colored glass decorated the edge of a body of contrasting color. Evocative of Victorian or Colonial styles, the Crest line struck a chord with those unenthused with abstract modern designs of other glass makers. Fenton's quality showed in that the ruffled edges were always uniform and in balance. Fenton's earlier milk glass pieces showed great fire when held to light. And while Silver Crest (milk glass with a single crystal ribbon edge) was the most abundant, advanced collectors have paid large sums for scarce colors and pieces made for short periods. Crystal Crest was the prototype for Silver Crest in 1941. Its double edge ribbons of clear and milk glass were simplified to a single "silver" (clear) crest in '42.