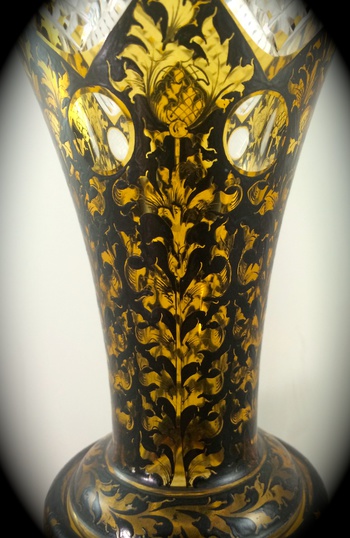 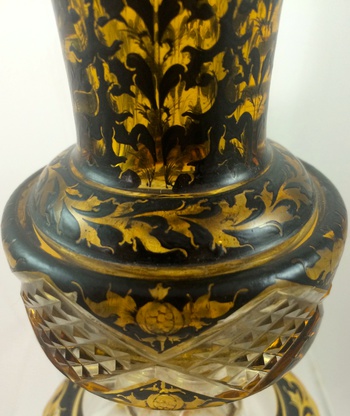 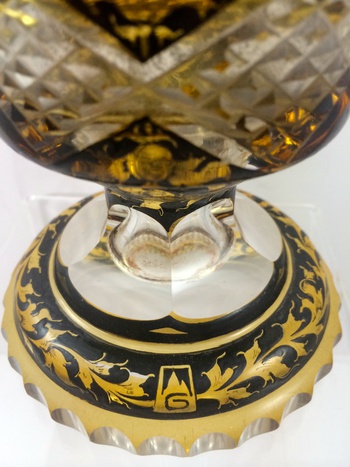 The first two articles I ever posted to CW, over three years ago, were cut-to-clear pieces. Number two (see link below) was a spectacular piece by Carl Goldberg, which I thought (and still do) was pretty special. Over the years I've come to realize that I was just scratching the surface (pun intended) :)

It is well known that Goldberg was a master of many techniques, and examples abound of enameled, cut-to-clear, silver overlay, copper overlay, wheel cut, engraved, acid cut-back, and oroplastic decoration.

This substantial piece is 10 inches tall and weighs nearly 2.5 pounds. It has features yellow stained cut-to-clear facet cut panels, round windowpanes and diamond cut sections. There is a very intricate leaf/vine pattern in flat black enamels over the whole piece, including the Goldberg cypher or logo along the base. The walls of the vase are easily 1/4" thick. The logo proudly proclaims where this gorgeous vase comes from - and rightly so. According to the Glasmarkenlexikon, by Carolus Hartmann, this version of the Goldberg mark dates to the firm's later years - ca. 1940.

The article on the previous Goldberg cut-to-clear example can be found here: