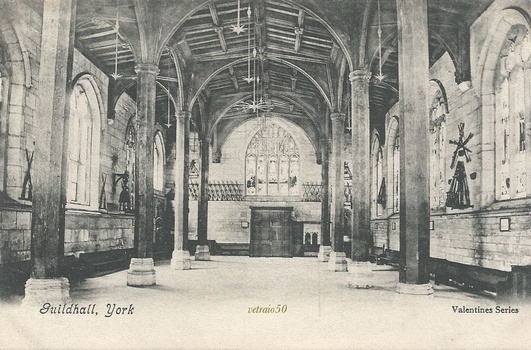 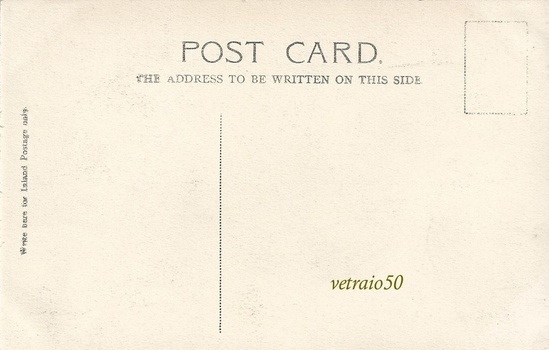 The Millers collected a PC of the interior of the ancient Guildhall looking towards the east end. The Miller’s visit to York in 1906 allowed them to see the Guildhall after repairs and improvements carried out in the early 1800’s. This included the installation of gas lighting in 1840 that you can see in the Valentine’s Series photo PC.

York certainly had a Guildhall by 1256. But this early building was refurbished and records show that a council meeting was held in the new Guildhall in May 1459. For over five and a half centuries the Guildhall has served as a meeting place for the guilds that controlled all trade within York, monitoring the quality of the workmanship and generally looking after their members’ welfare.

The Guildhall stands on the eastern bank of the River Ouse behind the Mansion House. It is an ample 96 feet long and 43 feet wide. Its size meant that it was suitable for grand ceremonies, assemblies, elections of mayors, their swearing-in ceremonies, and the commons' oath of loyalty to the new mayor.

York Guildhall as a venue has led to it see history being made. In 1483 Richard III was entertained in the Guildhall. It also served as a venue for the Court of Justice. Margaret Clitherow, charged with undercover and persistent perpetration of Catholicism, was tried there in 1586 at the City Assizes and subsequently executed by being pressed to death for her refusal to accept the court’s jurisdiction.

In the Civil War the sum of £200,000 paid to the Scots for supporting Oliver Cromwell’s Parliamentary forces is said to have been counted in the inner or ‘Justice Room’ in 1647. Charles I was duly handed over after the money was divided and paid out at Northallerton and Newcastle.

Queen Victoria’s prince consort Prince Albert was a guest of honour at the Guildhall at a famous Royal banquet in 1850, October 25. Alexis Soyer did the catering!

In April 1942 the Guildhall was seriously damaged by incendiary bombs in a German 'Baedeker' bombing raid. The building we now see is a faithful copy of the original, fully restored and re-opened in 1960.

Over the years the function of the buildings has changed. It is soon to be transformed yet again with the building of a new Council Administration Headquarters in York. It may end up as a reception hall used for wedding receptions: the cruelest cut of all?