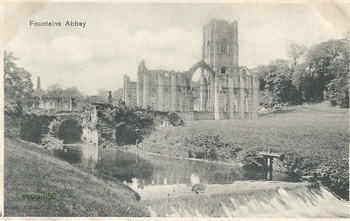 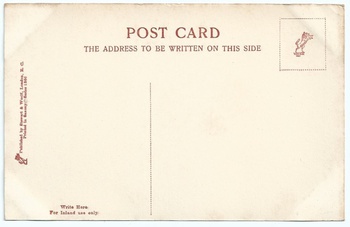 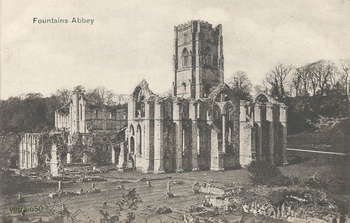 Two more cards from the collection of PCs collected by the Millers on tour in 1906. Both show the ruins of the Cistercian monastery founded in 1132 at Fountains in Yorkshire, England. Construction on the abbey church began in 1135. Now carpeted with grass and open to the sky, this ruined medieval church is among the most atmospheric sights in England.

Fountains Abbey and over 500 acres of land were sold by Henry VIII to Sir Richard Gresham, a merchant. The property was passed down through several generations of Sir Richard's family, finally being sold to Stephen Proctor who built Fountains Hall, an Elizabethan mansion built partly with stone from the abbey ruins, between 1598 and 1604. In 1767 it was sold for £18,000 to William Aislabie, who landscaped the abbey ruins to make a picturesque view from the Water Garden.

The small River Skell runs picturesquely along one side of the site; it provided an important water source to the abbey. A variety of monastery buildings cluster around the south side of the church. Behind the abbey to the east lie the extensive grounds of Studley Royal Park.

These two cards are from different companies. The second was produced by Valentine’s Co. Ltd.Ltd. (aka Valentine & Sons) (1825-1963) of Dundee, Scotland and London, England. In the 1890’s until 1902 most cards were printed in black & white collotype with undivided backs. This card is however a divided back. In the early 1900’s they were producing a great number of views of Great Britain labeled as the Valentine Series.

The first card was published by Stewart & Woolf (1900-1940’s), 8-9 Charles Street, London, England. They published a number of view-cards in halftone lithography. Some were manufactured in Saxony like this one which is part of a series numbered 1266.