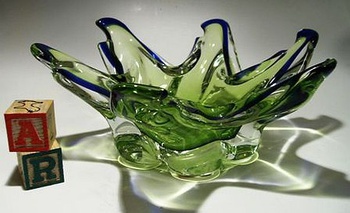 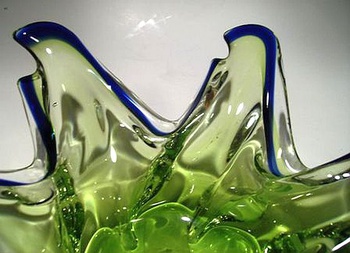 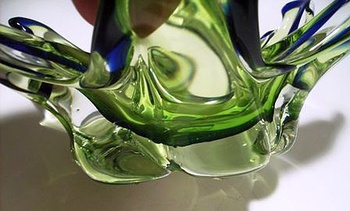 I bought this and noted it did have a label buried under masking tape someone HAD put on it. Each glass wing extension has a *notch* in it.

On the bottom was a heavy masking tape. You can see in the middle of it (Pic 1) and the oval label was under it. So I did peel back the masking tape in which pulled the whole label up with the tape. I slowly picked the label out from the white tape goo and it ended up with the GOO all over in (Pic 2).

So I took a wooden toothpick and slowly worked the goo (like snot) off the label (pic 3).....it was like Major Brain er-r-r-r-r...... Glass Surgery, lol. The label just says JAPAN on it, and is Red oval foil with gold lettering and a gold border

So since this is not a plastic label, or says "Made in Japan" but only Japan and a Foil label -- I would say this be a older Japan Art Glass (maybe 1950's or 1960's era). The label is a small oval *foil* label (red and gold) with just Japan on it.