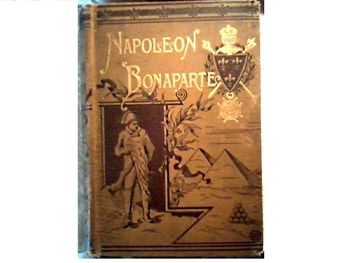 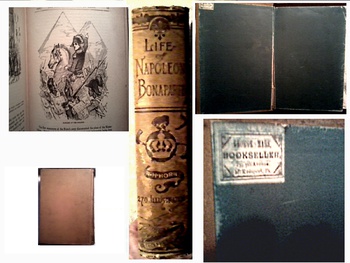 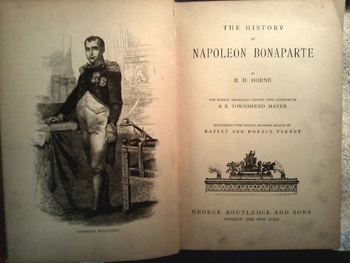 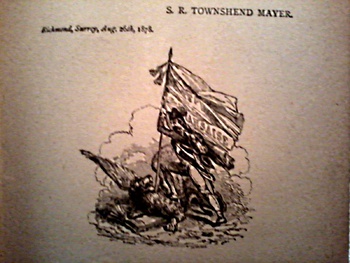 I usually don't by old books, but this was in the case at GW and wasn't too expensive. This is where they put most everything that has some value or at least they think so. The Life/History of Napoleon is written by Richard Henry Horne in this revised edition in 1876. The original was in two volumes but this has been combined with additions and 270 illustrations by Raffert and Horace Vernet. It's in fairly good condition, but the front cover is coming away from the spine a bit inside. There is a small label for George Mars Bookseller 239 5th Ave. McKeesport PA. in the upper left corner. The interior cover pages are a dark green flocked suede like paper. The color comes off on your fingers if handled too much which I found out after running my fingers over it to feel the texture. The first few pages have finger prints from these pages. It does erase with a bit of art gum though. It has a nice embossed cloth cover with a bit of gold, green and maroon in the details. The back is plain and the spine is nicely decorated. I really don't know if it worth anything but it is in pretty good condition for being 138 years old. -Mike-

Richard Hengist Horne (born Richard Henry Horne) (31 December 1802 – 13 March 1884) was and English poet and critic most famous for his poem Orion. Horne became a journalist, and from 1836 to 1837 edited the Monthly Repository. In 1837 he published two tragedies, Cosmo de' Medici and The Death of Marlowe. Another drama in blank verse, Gregory VII, appeared in 1840, and in 1841 a History of Napoleon in prose.
About the end of 1840 Horne was given employment as a sub-commissioner in connection with the royal commission on the employment of children in mines and manufactures. This commission finished its labours at the beginning of 1843, and in the same year Horne published his epic poem, Orion, which appeared in 1843. It was published originally at the price of one farthing, was widely read; three editions were published at that price, and three more at increased prices before the end of the year. In the next year he set forth a volume of critical essays called A New Spirit of life Age, in which he was assisted by Elizabeth Barrett Browning, with whom, from 1839 to her marriage in 1845, he conducted a voluminous correspondence.
In December 1849 Horne's acquaintance Charles Dickens gave him a position as a sub-editor on his new weekly magazine Household Words at a salary of 'five guineas a week'
In June 1852 Horne migrated to Australia, traveling as a passenger on the same ship as William Howitt and arriving in Melbourne in September. With assistance from Captain Archibald Chisholm, husband of Caroline Chisholm a contributor to Household Words, he was given a position as commander of a gold escort. It was later reported that on the first trip of the escort under Horne's command they returned to Melbourne with 'two tonnes weight of gold. The escort was robbed in 1853 and Horne wrote to The Argus with his recollections of George Melville, the bushranger convicted of the crime and hanged.
In 1860 Horne was again unemployed. In 1869, "dissatisfied with the failure of the Victorian government to fulfil what he conceived to be its obligations to him", he returned to England. A later memoria of Horne notes that after his return from Australia he settled in 'poor quarters in Marylebone' and 'ill at ease in London' his health suffered. Horne received a Civil List pension of £50 a year in 1874, which was increased to £100 in 1880, and died at Margate on 13 March 1884, leaving behind him much unpublished work.