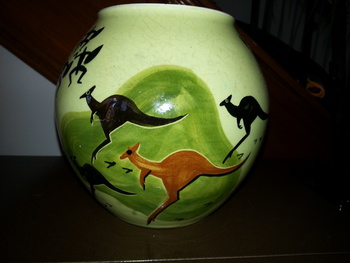 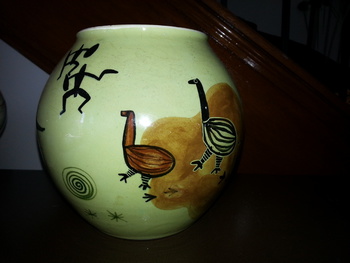 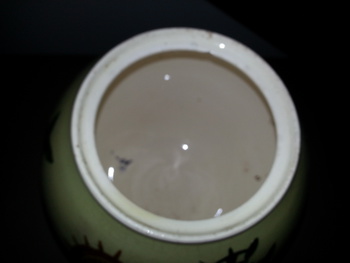 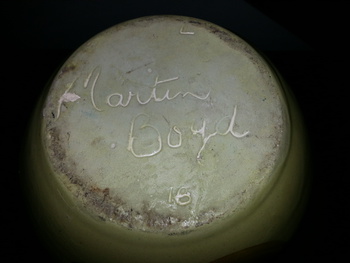 I suspect this Martin Boyd vase had a lid once upon a time. Hence the lip on inside of top.( see photo 3)
Martin Boyd Pottery was a Sydney-based commercial pottery set up by Guy Boyd with partners Norma and Leonard Flegg in 1946. Guy was training as a sculptor at the East Sydney Technical College after the war and needed an interim source of income. It operated under the name Guy Boyd Pottery at first, but was renamed Martin Boyd Pottery when the business was registered in 1948. When Boyd returned to Melbourne in 1951, Leonard's brother Ronald bought out his share and the Fleggs continued to operate the pottery as a successful venture until overseas imports put it out of business in 1963. The pottery was initially based in Neutral Bay, but moved to larger premises at Woollahra, and then at Ryde. Various artists and decorators worked at the pottery, producing a wide range of hand-decorated plates, bowls and other wares, some of which is now highly collectable. Work from 1948-1963 is incised 'Martin Boyd' or 'Martin Boyd Australia'