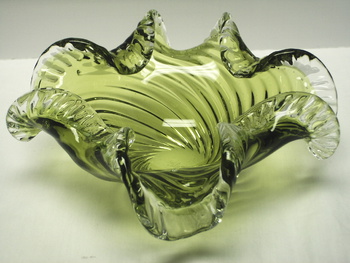 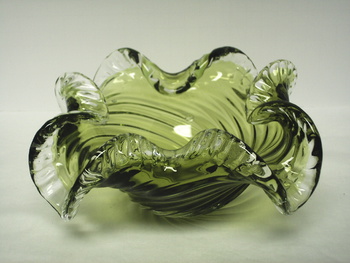 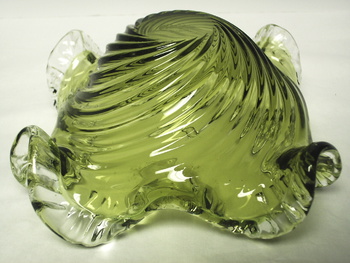 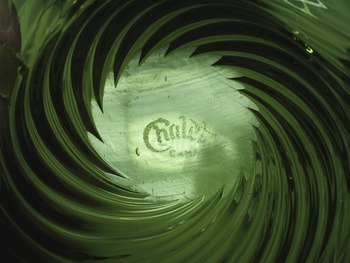 Hi
Everyone
I have found this nice green glass bowl last Friday, as mark at the bottom, Chalet Canada, very nice piece to add in my fairly new collection of glass.
I really enjoy hunting for glass.This bole stand 3.25 inch high by 8 inch wide.

The Chalet Artistic Glass was located in Cornwall, Ontario, in business from 1962 to 1975. The company actually began in Montreal as Les Industries de Verre et Miroirs in 1958, changing its name to Murano Glass in 1960. After a disastrous fire, the firm moved to Cornwall, 145 km to the southwest of Montreal, encouraged by financial incentives from the federal government. The company resumed production in May 1961. Murano Glass was located at 50 Harbour Rd., at the northwest corner with Edward St., in a 1919 brick building that was originally part of a huge late 19th-century cotton mill complex. (Today, many of the mill buildings remain standing and a few have been renovated and leased to new tenants. Sadly, the building occupied by the glassworks has been demolished.)
Murano Glass was Canada’s first handmade decorative glassware company. It was founded by three master glass artisans from Venice: glasscutter Angelo Tedesco, and glassblowers Luigi Tedesco (his brother) and Sergio Pagnin (his brother-in-law). As the business expanded, additional glassblowers were hired from Venice, as well as many assistants from Cornwall and the nearby St. Regis Mohawk Reserve at Akwesasne.
Early production was in the style of traditional Venetian glassware—ornate and elaborate. But when Sid Heyes from Toronto joined the firm as its first president, and Garry Daigle from Montreal became its first sales manager, they convinced general manager Angelo Tedesco and the glassblowers that Canadian buyers wanted much simpler styles. When production shifted to the fluid lines and heavy free-form style of what is known as stretch glass, sales began to soar. In late 1962, the company changed its name to Chalet Artistic Glass to make it obvious to consumers that this was a Canadian company producing Canadian designs for Canadian tastes. Although collectors today call these pieces “Chalet Glass,” the word “Artistic” was included in the company name to emphasize that their ware was handmade by skilled artisans.
The vivid jewel tones of Chalet Glass caught everyone’s attention in the 1960s. The brilliant transparent colours were delightfully appealing. The organic, flowing shapes were anything but boring. The company’s range included centrepieces, bowls, vases, candleholders, baskets, goblets, birds and animals. Chalet Glass reached far into the United States and Commonwealth markets, offering more than 400 shapes. Its success was attributed to the novelty, beauty and affordability of its products.
Although many small pieces of Chalet glass were blown into moulds, the large heavy pieces were blown and worked by hand. Without the use of moulds, no two examples were perfectly identical. The molten glass was pushed and pulled using a variety of simple tools to create the final shape. The curves vary from gentle to dramatic, and complemented the living and dining room decor of the period. The final free-form result was so fluid that it could only be described as a flight of the imagination.

You can easily identify Chalet Glass pieces by the sandblasted “Chalet CANADA” logo on the bottom. The word “Chalet” appears in a calligraphic lettering style to indicate the handmade quality of the company’s wares. The crossbar of the letter “t” is actually a glassmaker’s blow pipe with a gather (glob) of molten glass at one end. This, again, was meant to reinforce the idea of skilled handcraftsmanship. Some pieces also have “CORNWALL” sandblasted on the bottom.
But not all Chalet pieces are marked. Many only had stickers that rarely survive today. The most commonly found example is the one shown here. It was made in at least two asymmetrical oblong sizes and sometimes the silver and black colours are reversed. Chalet’s cranberry glass was also identified by a hangtag—a 2 by 3 inch cardstock tag hung from the piece by a decorative gold cord.
Until 1965, Chalet Glass had only one sales office, Tex Novelty in Montreal. Later, the distributor N.C. Cameron and Sons in Toronto was added. By 1966, Chalet had six foreign representatives. In the U.S., these were in Chicago, Dallas, Los Angeles, and Fayetteville, New York. Remarkably, there were also distributors in Johannesburg, South Africa, and London, England. The English sales office lasted for only two years. While the South Africa link was dropped after one year, but picked up by another representative in Durban from 1969 until 1973. In the United States, distribution from Chicago continued uninterrupted, while the others fell away. From 1969 there was one additional distributor in New York. For 1974 and 1975, Chalet’s presence in the American market was handled solely by one of the largest distribution companies in the world, Riekes Crisa in Omaha, Nebraska. Chalet glassware marketed by Riekes Crisa had black and silver stickers shaped like an artist’s palette that read “HANDCRAFTED IN CANADA RIEKES CHALET LEAD CRYSTAL OVER 24% LEAD CONTENT” with the Riekes Crisa logo.
By 1972, Chalet Glass had 40 employees, including 15 from the St. Regis Mohawk Reserve, and the expectation was that the workforce would increase to 200 by the following year. In 1974, Sergio Pagnini replaced Sid Heyes as president, and Angelo and Luigi Tedesco became vice presidents. Garry Diagle remained as sales manager. But this reorganization did not solve the problems the company was having. And in 1975, the company went bankrupt. The business and equipment, but not the building, were bought at auction by entrepreneur Maurice Jaslow, in partnership with Angelo Rossi, a skilled glass artisan. Maurice Jaslow was the owner of Jaslow Glass Industries in Montreal. Angelo Rossi was born in the Italian glassmaking centre of Murano. His father and grandfather were glassblowers, and so are his four sisters. In fact, the Rossi family were glass blowers since the 14th century. Angelo Rossi had apprenticed with several master glassblowers in Murano and was now on his way to Caracas, Venezuela, with two glassblowing friends to attend a wedding. He stopped in Cornwall to visit some of the Chalet Glass artisans he knew from his hometown. The meeting and resultant partnership with Maurice Jaslow was purely by chance.
Prior to Chalet’s bankruptcy, the company mainly produced wine glasses and water goblets. But Angelo Rossi was not inclined to make this type of ware. Instead, a new company, Artistic Lighting, was established to make table lamps and ceiling lighting fixtures. It was the manufacturing plant for Jaslow Glass Industries. The firm soon grew to 120 employees. Most of its production was exported to the United States.
Unfortunately, Angelo Rossi had a serious work accident with the prognosis that he might never walk again. During this period, he sold his share of Artistic Lighting to Maurice Jaslow. But without Angelo Rossi overseeing production, the company suffered. Artistic Lighting folded and Jaslow Glass Industry shifted production to a Montreal plant. Jaslow Glass remained in business until 1998.