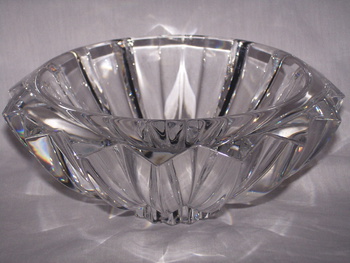 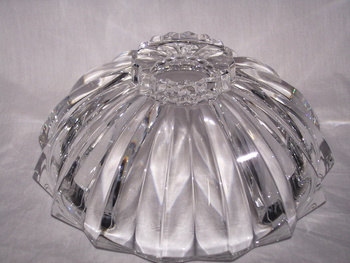 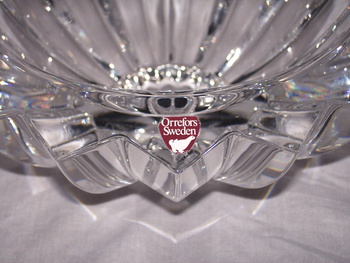 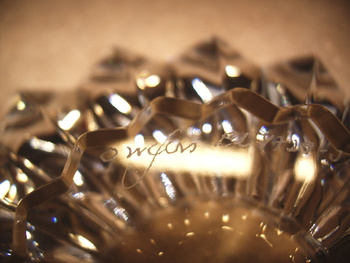 Hi
Everyone
I have found this today, it's a Swedish Glass by Orrofors, by the artist"Erika Lagerbielke"as mark at the bottom with serial number, i do some research for finding this info at the company web site, now little bit hard time for the date, on the mark we read "EL 4729 J1" the EL stand for the desingner name, i double check the other letters, and i could find it for now, if someone have and ideal, the info will be much appreciated.
Very,very heavy and so BEAUTYFUL piece of Glass, i cherist this one already.I even bring with me at work inside the store and put in my locker utill i finish work,lol that's so funny.:-)
I really enjoy hunting for glass.This bowl stand 3.25 inch high by 7.5 inch wide on a 2.25 inch base.

------------------------------Orrefors: A History------------------------------------
The Orrefors glasbruk was founded in 1898 on the site of an earlier ironworks. It was not until 1913, when the Consul Johan Ekman bought the factory, that Orrefors started to produce things such as drinking glasses, vases and other items. Up until that time, Orrefors mainly produced bottles and glass for windows. Johan Ekman was a wealthy man and also owned a cellulose factory. This was also the reason why he bought Orrefors glasbruk – with the factory he purchased extensive woodlands. Ekman brought in the manager of his cellulose factory, Albert Ahlin, to manage Orrefors. Ahlin hired Oscar Landås, Eugen and Knut Bergkvist (both came from Kosta), Fritz Blomqvist and Heinrich Wollman. The latter came from Bohemia, where there has been a long tradition in (art-)glassmaking. The first attempts at more modern glass were cameo vases in the style of renown French glassworks such as Daum and Gallé. Other Swedish glassworks such as Kosta and Reijmyre already did this for some time. However, the quality of these works was not at all close to the quality of their French counterparts, and soon this copycat behavior was abandoned. By trying to copy their French colleagues, the Orrefors glass workers learned techniques and skills that would serve them in their further development. One of these early developments is the Graal technique that was developed by Knut Bergkvist.
-----------------------Simon Gate and Edvard Hald join--------------------------
In 1916 and 1917, Simon Gate and Edvard Hald joined Orrefors. These two would have a great impact on Orrefors’ development and their names are still synonymous with Orrefors art glass today. Even though Orrefors produced Graal glass since 1916, this was not done in a large way and almost all Graal items produced until 1920 were unique items. Only from 1920 onwards were some models manufactured in larger numbers – usually up to 50 pieces of the same model or design. However, Orrefors could not maintain a factory based on the sale of Graal glass. In this period, the glassworks earned its money from cut glass.
The cut glass produced by Orrefors in this period is characterized by its thinness, something that helps to distinguish early glasses from later ones in the case of some designs that have been produced for many years. The cut glass was engraved using fixed copper wheels which required a lot of skill by the workmen. Orrefors rose to international fame during this period for its engraved glass.The most famous piece was the 1922 Parispokalen which the City of Stockholm offered to the City of Paris as a gift. With the 1925 Exposition International des Arts Decoratifs in Paris, Orrefors became firmly established in the international market. Some of the more spectacular engraved glass pieces during this period are Negerhyddan, Thunderstorm (see picture above) or Fireworks bowl.
------------------------------The great depression----------------------------------
With the great depression also came a difficult time for Orrefors. Changing ideas about style and design led to a new type of glass that characterized itself by smoothness and simplicity. When the great depression ended, this new style of glass became characteristic for Orrefors. Examples of this style are vases that are thick-walled and have a black foot. The glass of these thick-walled vases almost looks as smooth as flowing water and gives the viewer the idea of an organic type of glass. The thickness of the glass of this period is a stark contrast to the earlier finesse that characterized Orrefors’s glass.
Vicke Lindstrand, Sven Palmqvist and Nils Landberg
Vicke Lindstrand joined Orrefors in 1928 and stayed there until 1940. Lindstrand made some famous examples of the above mentioned thick-walled, smooth vases in which the engraving seemed to “float”. A well-known example are the Pearl Diver vases.
Both Sven Palmqvist and Nils Landberg were students at the Orrefors glass school and were accomplished engravers. They would become very significant designers for Orrefors from the 1940s onward. These two designers are responsible for a whole range of well-known styles and techniques such as the Stella Polaris range, Kraka, Ravenna and Fuga (also sometimes called Colora), and the Tulpan range.

In the mid-1930s, Edvard Hald developed the Slip-graal technique. This technique is based on the Graal technique that was developed by Bergkvist almost twenty years earlier. The main difference is that the motive is engraved, rather than etched using acid.
The most famous example of this technique are the so-called fish-graal vases. Hald’s idea was that the finished vases would look like aquaria. These types of vases are so popular that they were still being produced up until 1989, when it was decided to only produce designs from contemporary designers.

Edvin Öhrström, a sculptor by trade, joins Orrefors in 1936. Together with Lindstrand he developed the Ariel technique. This new technique is based on the Graal technique and was developed more or less by accident, when they noticed that in certain cases air bubbles developed when the thicker, colorless glass, encased the colored design. At first, both Öhrström and Lindstrand worked in this technique, but later it was used almost exclusively by Öhrström until Ingeborg Lundin joined Orrefors in 1947.

Ingeborg Lundin joined Orrefors in 1947. She was the first female designer to do so. Together with Edvin Öhrström she worked on the Ariel technique and later became famous for her Äpple, which is basically an oversized apple that she made in clear glass for the 1957 Triennale in Milano. Both Lundin and Landberg won prizes in Milano in 1957, Lundin for her Apple and Landberg for his Tulip glass. On the left you can see an example of an Ariel vase with a geometrical pattern made by Ingeborg Lundin.
Orrefors today
In 1990 Orrefors and Kosta Boda merged to form Orrefors Kosta Boda AB, and in 2005 the glassworks were sold to New Wave AB, a company that focuses on lifestyle and design.
New Wave AB decided to close the Orrefors glassworks at the end of 2012, giving lack of profitability as the main reason.