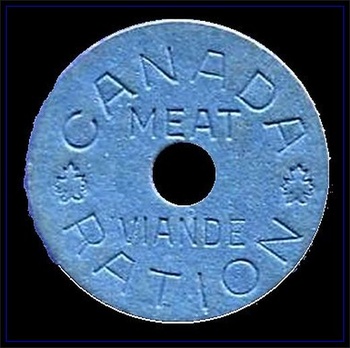 Have a few of these in my Dad's stuff. The Net says Posted [Quoted] from:

"""Our newest From the Vault item is a meat ration token from World War II produced by the Canadian Government for the second round of meat rationing that occurred between 9 September 1945 and 26 March 1947.

As with such items as tea, coffee, sugar and butter, there was the necessity to ration meat and set prices during the war years. Many of these items were imported and all available shipping was needed for the war effort, not to mention that importing from certain countries was no longer possible. Secondly, many of the food items produced in Canada were needed for troops overseas and later as emergency aid to Europe’s war ravished countries.

Families would receive a coupon booklet exchangeable for meat and other products. The problem for many single people or couples was that they would not need the two pounds of carcase meat per week that each coupon would buy, later one and a third pounds of clear meat, and as a result would forfeit a whole coupon for a lesser amount of meat or run into the danger of wasting the product since home freezers were not as prevalent as they are today. To solve this problem during the second round of meat rationing, the Canadian Government issued meat tokens. Eight tokens were the equivalent of one coupon so if an individual only wanted half of their meat ration at that time they would be given their purchase and four tokens to use at a later date.

The example present in the Museum’s collection is a gun-metal blue coloured wood pulp fibre disk with a hole in the center. The token is stamped on both sides with the following: "MEAT" above hole in disk, "VIANDE" below hole, "CANADA" along the top curve of the disk, "RATION" along the bottom curve.""""