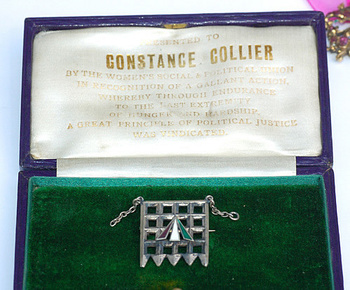 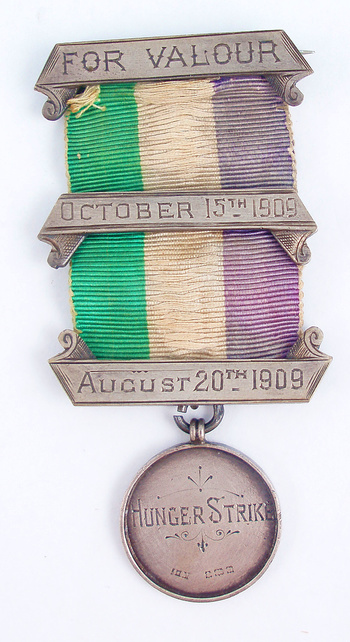 Sorry this is so long, but we women were awarded the right to vote less than 100 years ago! We stand on the shoulders of those brave ones who fought this battle!

Photos above from left:

- Hunger strike medal issued to Rona Robinson. The circular silver medal is inscribed "HUNGER STRIKE" on the front and "RONA ROBINSON" on the obverse. The bars are inscribed in descending order "FOR VALOUR", "OCTOBER 15th 1909" and "AUGUST 20th 1909. The two bars signify two separate arrests and hunger strikes that Rona endured for her cause. On the obverse of the top bar is the makers name and address "TOYE 57 THEABOLD RD LONDON" it is believed that no more than 100 of the medals were awarded; there is no answer to how many have survived.

The cause of women's suffrage was a worldwide phenomenon, but we tend to have the most information on the British and American movements. Each was similar in that the initial push was for peaceful legislative change.

By 1905 in the UK, the media had lost interest in the struggle for women's rights. Newspapers rarely reported meetings and usually refused to publish articles and letters written by supporters of women's suffrage. Emily Pankhurst, the leader of the Women's Social and Political Union (WSPU), advocated a new strategy of militancy to obtain the publicity that she thought would be needed in order to obtain the vote.

During the summer of 1908 the WSPU introduced the tactic of breaking the windows of government buildings. On June 30th suffragettes marched into Downing Street and began throwing small stones through the windows of the Prime Minister's house. As a result of this demonstration, twenty-seven women were arrested and sent to Holloway Prison.

Marion Wallace Dunlop, an exhibited painter and daughter of nobility was a supporter of women's suffrage and in 1900 she joined the Central Society for Women's Suffrage. She was also a socialist and from 1906 she was an active member of the Fabian Women's Group. She joined the WSPU and in July 1908 Wallace Dunlop was arrested and charged with "obstruction" and was briefly imprisoned.

On 25th June 1909 Wallace Dunlop was charged "with wilfully damaging the stone work of St. Stephen's Hall, House of Commons, by stamping it with an indelible rubber stamp, doing damage to the value of 10s." According to a report in The Times, Wallace Dunlop printed a notice that read: "Women's Deputation. June 29. Bill of Rights. It is the right of the subjects to petition the King, and all commitments and prosecutions for such petitionings are illegal."

In her book, Unshackled (1959) Christabel Pankhurst claimed: "Miss Wallace Dunlop, taking counsel with no one and acting entirely on her own initiative, sent to the Home Secretary, Mr. Gladstone, as soon as she entered Holloway Prison, an application to be placed in the first division as befitted one charged with a political offence. She announced that she would eat no food until this right was conceded."

Wallace Dunlop refused to eat for several days. Afraid that she might die and become a martyr, it was decided to release her after fasting for 91 hours. Soon afterwards other imprisoned suffragettes adopted the same strategy. Unwilling to release all the imprisoned suffragettes, the prison authorities force-fed these women on hunger strike. In one eighteen month period, Emily Pankhurst, who was now in her fifties, endured ten of these hunger-strikes.

To commemorate these brave actions, Sylvia Pankhurst designed a brooch and it was presented to Suffragette hunger strikers who had been incarcerated in Holloway prison for their militant actions in support of the cause.

The silver brooch is in the shape of a portcullis gate, representing the House of Commons, with a central convict's arrow enameled in the colors of the Suffragette movement - purple for dignity, green for hope and white for purity, and with convict chains to each side. The brooch was presented in a purple box with white satin lid and green velvet interior. The lid of the box is inscribed:

Presented to [name of hunger striker] by the Womens' Social and Political Union in recognition of a gallant act whereby through endurance to the last extremity of hunger and hardship a great principle of political justice was vindicated.