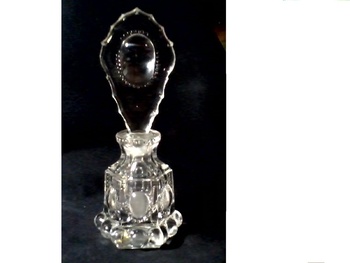 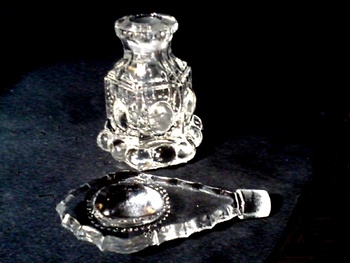 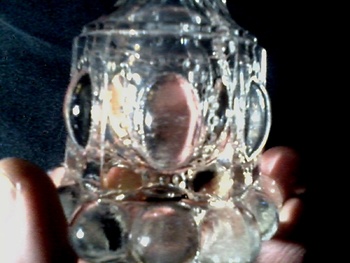 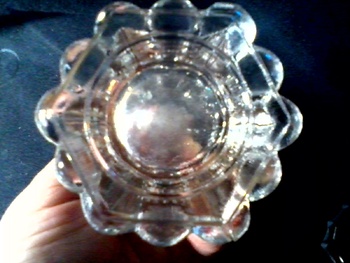 I spied this on the showcase wall at Volunteer's of America. It's 7 1/2" tall and the stopper makes up half it's height. It's part of a dresser set made by L.E. Smith Glass Co. There would have been another bottle like this one, a powder box, and a tray. The pattern as far as I know it called "Bead Medallion" or "Beaded Medallion". Sometimes they refer to the ball base as a "Boopie" pattern. It's heavy pressed glass with seams down both sides. Hopefully this is not a "reproduction" and it should date from 1940.
-Mike-

The company was established in 1907 in Jeannette, Pennsylvania and despite being overlooked by many American glass collectors, is one of the few remaining hand-made glass factories in the United States. It is perhaps best known for producing the first headlight lens for the Model T Ford.
They began manufacturing colored glass in the early 1920s. Their most popular colors were cobalt, amethyst, yellow, amber, green and pink. The company finally gained nationwide recognition for their unique black glass formula, which set them apart from the competition of the time.
In 1975 the company was purchased by Owens-Illinois, Inc. of Toledo, Ohio, a glass container manufacturer. Smith continued to operate as a wholly-owned subsidiary.
L.E. Smith Glass Company was acquired by William Kelman in 2005 and is now known as Smith Glass Co..