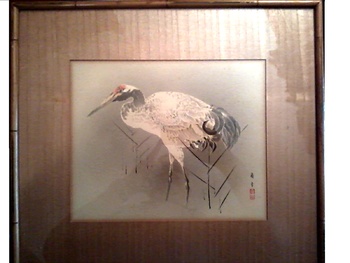 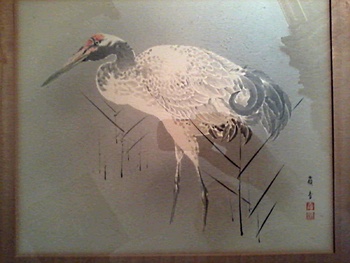 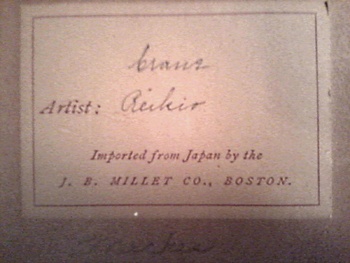 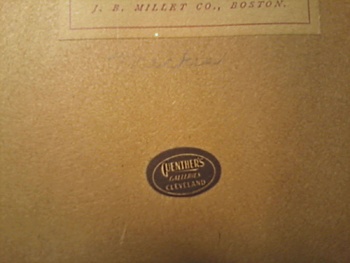 I had to leave this behind at Goodwill the other day because it was so expensive and I also wanted the other more affordable silk crane picture I posted yesterday. I took a chance that it would still be there today and it was. It's a beautiful pen and ink drawing. The frame imitates bamboo and it's matted with a thin veneer of wood. The back still has all the gallery labels and info. The label says "Crane" and the artist is Reikio. There's a faint penciled name under the label that looks like "Meckes" maybe the original buyers name. The oval gallery label was from right here in Cleveland. The Guenther Galleries supplied objets d'art to many of the wealthy families of Cleveland at the turn of the century and boasted works by such names as Greuze, Parmiginano, Corot, and Daubignay. A very exclusive gallery from what I've read . Probably dates from the 1900's and was imported from Japan by J.B. Millet Co. Boston and sold by Guenther's in Cleveland. Millet's seems to have imported a lot of this type of artwork at the turn of the century. I'm finding auctions of similar items, illustrated books as well as photographs (collotypes) from Japan. Nothing yet about the artist. but I'll keep searching.
-Mike-

The GUENTHER ART GALLERIES CO. was established in 1868 by Felix Guenther in the Old Forest City House Hotel on PUBLIC SQUARE. Over the years, the Guenther Galleries made a series of moves up Euclid Ave. to the Stone Bldg., the King Bldg., the Siegel Store Bldg., the site of the Cowell & Hubbard Block, the site of the Keith Bldg., and 1725-27 Euclid Ave. In 1934 the galleries made their final move, to the 2nd floor of the Kinney & Levan Bldg. in PLAYHOUSE SQUARE. The Guenther Galleries supplied objets d'art to many of the wealthy families of Cleveland at the turn of the century and boasted works by such names as Greuze, Parmiginano, Corot, and Daubignay. In 1931 the Guenther Galleries merged with the Leamon Galleries to become Guenther Art Galleries. In 1933 it was the largest exclusive picture store between New York City and Chicago, and it remained one of the Midwest's outstanding art galleries until the MAY CO. OF CLEVELAND bought its entire stock and sold it at an exhibition and sale on 22 May 1963.