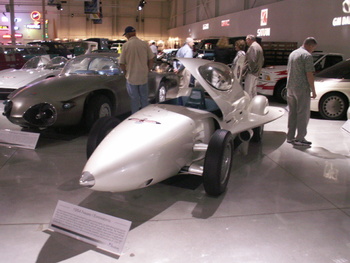 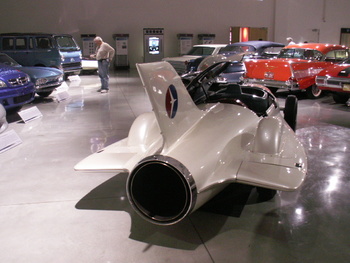 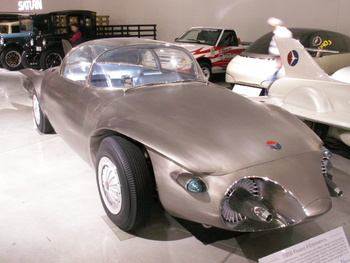 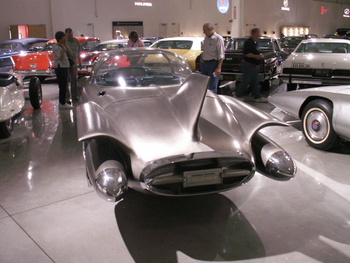 These are, the 1954 Firebird I Experimental & Firebird II Experimental cars as seen during my visit in 2009.
The photos of their descriptions did not turn out good enough to read, so I pasted these descriptions from the Heritage Center Website (a little long, but more information).

Written by the GM Heritage Center Staff in Detroit.

The XP-21 Firebird 1 was the first gas turbine automobile ever to be built and tested in the United States. Designed strictly as an engineering and styling exercise, Firebird 1 was intended to determine whether the gas turbine could be used as an efficient and economical powerplant for future vehicles.

Unlike a jet airplane, which develops thrust through the action of exhaust gas through a tailcone, the Whirlfire Turbo-Power engine propelled the Firebird 1 through a power turbine acting on the rear wheels via a transmission. The engine was capable of 370 hp at a power turbine speed of 13,000 rpm.

The Firebird II was the second of the three gas-turbine powered experimental Firebirds developed by General Motors during the 1950s in its search for alternative means of automobile propulsion. It made its public debut at the GM Motorama of 1956 in New York City’s Waldorf-Astoria Hotel as a revolutionary form of family transportation destined for travel along the "Safety Autoway" of the future.
The Firebird II was designed by GM Styling under the direction of Harley Earl. His vision for the Firebird II was that of a comfortable, four-seat family car. There were two identical bodies built for the Firebird II, one made of titanium and one made of fiberglass. The use of titanium was a significant design feature as it was the first time this lightweight metal was used in the construction of a motorcar. The titanium body was left unpainted at Harley Earl’s insistence and was brush-finished to a satin luster.
The exterior design of the Firebird II was aerodynamic from the low tapered nose to the dorsal fin deck. Fuel tanks were suspended from the rear fender on either side of the car. A transparent canopy allowed for 360 degree visibility and had sections that automatically lifted up from the doors to admit passengers when a magnetic key was inserted into a slot on the body panel. In keeping with the theme of family transportation, the Firebird II had a luggage compartment that held eight pieces of specially styled lightweight fitted luggage. The compartment was just below the rear deck and rose to waist height for ease of use with the flip of a switch.
The Firebird II and engineered for use along the electronic highway of the future. Its communications system allowed the driver to contact an operator along this automated highway who would take control of the vehicle and guide it to its destination thus allowing for a more pleasant and less stressful traveling experience. The interior of the Firebird II featured four individually adjustable, reclining lounge seats for maximum passenger comfort and snack tables for use during automated travel.
General Motors Research Laboratories developed the engine and chassis for the Firebird II under the guidance of Research Vice President Dr. Lawrence R. Hafstad. The new Whirlfire GT-304 gas turbine engine powered the vehicle tackled the fuel consumption, high heat loss, and engine noise problems of its predecessor, the GT-302, that drove the Firebird I. As such, this engine was much more efficient and provided a big step forward in the development of gas turbine propulsion.