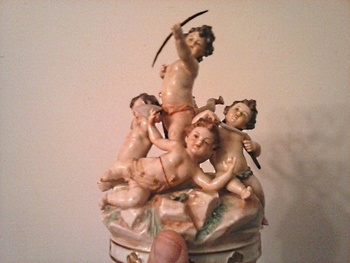 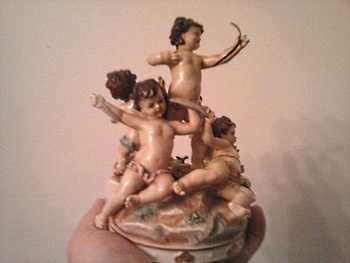 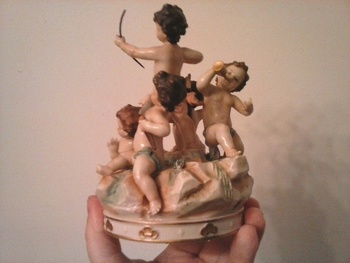 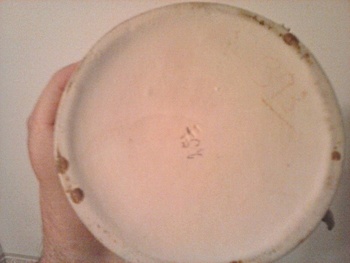 I found these little beauties at Savers a few days ago. My old camera didn't like Windows 10 , which by the way is awesome. So I used my android phone. No problems now. I'm thinking it's Meissen or at least German. The quality is there in the painting and detail but nothing specific marked on the bottom. A tiny faint embossed number in the center obscured by an old price mark. It's either "117" or "711". At first I thought it might be part of something bigger but I checked online and there are similar stand alone pieces. Each little guy is holding something different. Mostly war related. A shield, a dagger, a bow and arrow. One is blowing horn. Another has a ball or fruit in his hand. It's quite a mix. The porcelain is very hard and rings like a bell. Not a speck of damage to all those tiny little fingers and toes. The archer was missing his bow. His finely detailed fingers curled over something either a wood or metal bow at one time. There are no remnants that anything was broken off. I fashioned him one from toothpick wood and it fit right between his fingers. The other hand is pulling the string so maybe I'll add a piece of gold thread to replace the missing bow string. -Mike-