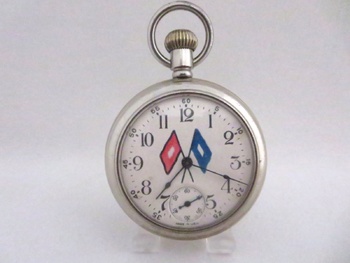 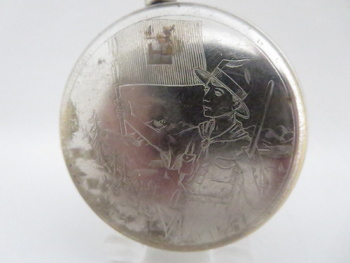 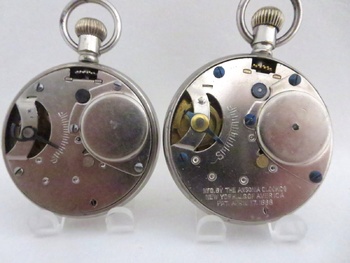 In my "Ansonia Collection" post, I had two "scout" watches. The "Scout Compass" watch, that already has an individual post.
This is the Ansonia "Scout Troop" watch with the crossed troop flags on the dial and the Scout Troop scene embossed on the back cover.
The movement on this watch is not marked, but also shown is a marked MFG'D BY THE ANSONIA CLOCK CO. NEW YORK U. S. OF AMERICA PAT. APRIL 17, 1888 movement for comparison.
Early Ansonia watch movements did not have dates stamped on them like the later ones, with a letter and two digit number, i.e. (A 24). So to date this watch to a year of manufacture is just a guess.
First, Ansonia Clock Co. started business in 1850, incorporated in 1873, manufactured their first pocket watch in 1904 and ended their manufacturing in 1930.
The Boy Scouts of America was incorporated on February 8, 1910.
In 1922, the Boy Scouts of America modernized its uniforms, and from 1922 until 1948, all scouts wore “campaign” (Smokey Bear) hats, like seen on the boy scout troops on the back cover of the watch case.
With this information, I can only suggest, that this watch was manufactured between 1922 (the beginning of the campaign hats) to 1930 (when Ansonia ceased being in business).
Thanks for stopping by and looking,
Dave