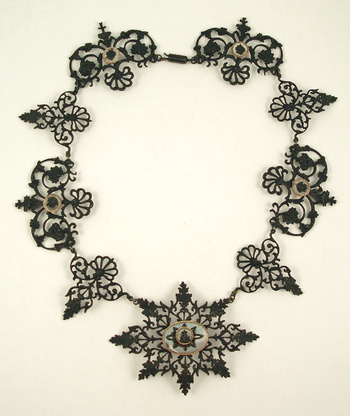 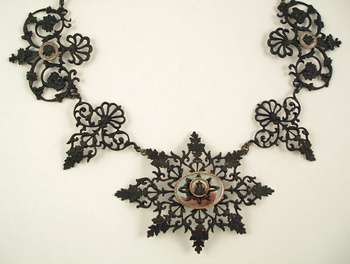 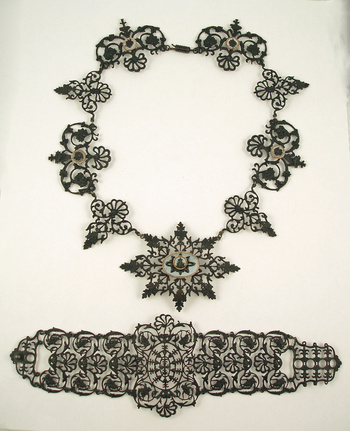 Great (and intact) Berlin Iron is hard to find! While on my recent trip, I visited an antique dealer in Berlin who had recently acquired a fantastic collection and I purchased this necklace and bracelet (circa 1840). Both are by Siméon Pierre Devaranne, born 1789 - died 1859.

The necklace is made of leaf and vine motifs, with small polished steel plaques with floral designs in the center, each with a twisted gilt surround. The bracelet also has floral and vine designs, with an adjustable clasp.

Cast-iron jewelry was an inexpensive but fashionable novelty for consumers in Europe and America from around 1800 to 1860. Developed in Germany in 1806–7 and often worn during mourning, it became the symbol of Prussian patriotism and resistance to Napoleon I in the Prussian War of Liberation fought from 1813-15. Women donated gold jewelry to their country in exchange for iron inscribed ‘I gave gold for iron’.

The transformation of cast iron, a dark metal of little value, into a fashionable product was an important Prussian manufacturing success. Factories became adept at casting small, delicate parts which could be assembled to create the jewelry. A renewed interest in the Medieval past throughout Europe brought stylistic change. After 1815, the Neo-classical designs of earlier Berlin ironwork were replaced by Gothic motifs such as the trefoil, quatrefoil, and fine pointed arches. The jewelry quickly gained an international profile. Demand peaked in the 1830s, when Berlin alone had 27 foundries and manufacture spread to France and Austria.

Post-1815, two of the most well-known jewelers making cast iron jewelry were Johan Conrad Geiss and Siméon Pierre Devaranne. Both created exquisite, lace-like jewelry with Geiss's work typically more geometric with its trefoils and quatrefoils and Devaranne's more delicate. Their work was extraordinarily popular, with factories in Berlin unable to keep up with demand (both opened their own foundries).