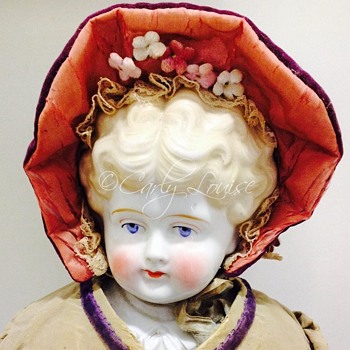 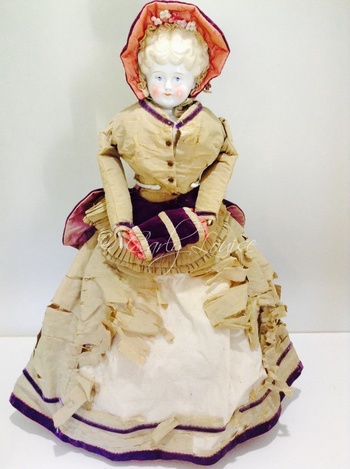 In the china head doll collecting realm, the humble Low Brow was the most highly mass produced, and without a doubt the most common, form of hair arrangement-its actually quite unbelievable just how many Low Brows were made from the 1890's up until roughly the 1930's. I have a book that replicates an original early Edwardian catalog (it could be Sears, but I might be mistaken) offering a myriad of children's toys and accessories of the era. A page is devoted to Low Brow china head dolls-from memory the catalog offers 12 dolls for 2 cents, complete with bodies, some being the fantastic printed bodies featuring ABCs, world flags etc. Patriotic bodies are my personal favourite. I own two examples of these, one being a flags of the world body, the other depicts a child in a rural setting.

Many collectors new to the field often start their china head journey by collecting Low Brows. I collected a small amount in varying sizes before purchasing examples that were a little earlier and had fancier or more sought-after hair styles. Although Low Brows don't tend to command high prices, examples in perfect condition, with an antique body and careful painting are still appealing, and a good way to begin a collection and for studying purposes.

Pet Name china head dolls were produced in Germany, usually by Hertwig & Co, who generated dolls and novelties from the 1860's-1940's, for the American market. They were introduced in approx the mid-to-late 1890's and continued to be sold for the next 10 or so years; some for Butler Brothers. I've read that Kloster Veilsdorf made Pet Name dolls for Butler Brothers also.

This particular example bares the name 'Mabel' on the front of her molded shirt and collar, in gold lettering. Other names available included Agnes, Bertha, Dorothy, Marion etc. Some examples in my opinion, seem harder to come by, including Ruth, Daisy, Pauline and Florence.

Mabel is 24", with a slightly turned head; a plus is that she has blonde hair, which is a little less common, black is the prevalent colour. Much less common is the cafe au lait colour. Due to the incredible mass production of these dolls, many were carelessly and shabbily painted. Mabel managed to leave the factory looking well painted if not a little dissatisfied, her facial expression is faraway and in deep concentration, her pink cheeks and rose-red lips are as vibrant today as they were over 100 years ago. Mabel is marked 'Patent Appd For Germany' on the back of the shoulder plate.

While this example is not too difficult to obtain, her crowning glory to me is her impressive antique dress (even though its clearly had a hard life) and layer upon layer of antique undergarments. The body was reproduced in the 1970's in the antique style (exhibit 4 above). From memory she's stuffed with straw I think. The maker of the body intended for her to have a body that matches those of earlier days-the striped red and white stockings, the kid boots adorned with tiny black buttons.

Mabel's dress would've been grand in its day. Its yellow-coloured silk has faded and shredded substantially, its trimmed with beautiful plum-coloured velvet. Her hands are leather and feature articulated fingers, which hold a silk and velvet muff. A gorgeous bonnet with old flowers and a large velvet bow at the back of the dress complete this marvelous outfit. The undergarments are antique and are of many layers, all trimmed with beautiful old lace. Photo 4 shows her being very un-Edwardian flashing her drawers, much to her horror and disgruntlement.

Mabel has been spending her later years in Australia since around the 70's, before that no information is known.

Collection of Four Antique China He...
$76