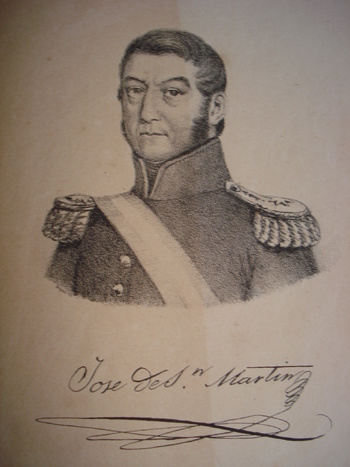 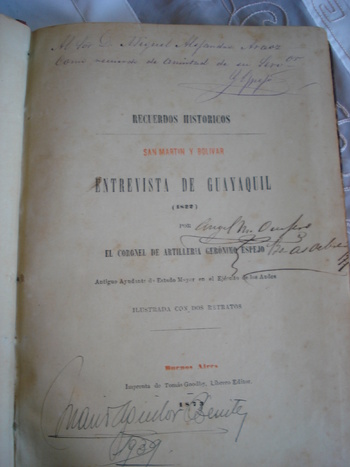 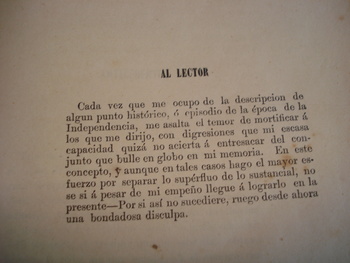 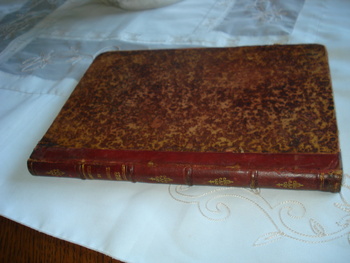 José Francisco de San Martín y Matorras (25 February 1778 – 17 August 1850), known simply as José de San Martín (Spanish pronunciation: [xo?se ðe san mar?tin]), was an Argentine general and the prime leader of the southern part of South America's successful struggle for independence from the Spanish Empire. Born in Yapeyú, Corrientes, in modern-day Argentina, he left his mother country at the early age of seven to study in Málaga, Spain. In 1808, after taking part in the Peninsular War against France, San Martín contacted South American supporters of independence from Spain. In 1812, he set sail for Buenos Aires and offered his services to the United Provinces of the Río de la Plata, present-day Argentina. After the Battle of San Lorenzo and time commanding the Army of the North during 1814, he organized a plan to defeat the Spanish forces that menaced the United Provinces from the north, using an alternative path to the Viceroyalty of Peru. This objective first involved the establishment of a new army, the Army of the Andes, in Cuyo Province, Argentina. From there, he led the Crossing of the Andes to Chile, and triumphed at the Battle of Chacabuco and the Battle of Maipú (1818), thus liberating Chile from royalist rule. Then he sailed to attack the Spanish stronghold of Lima, Peru.
On 12 July 1821, after seizing partial control of Lima, San Martín was appointed Protector of Peru, and Peruvian independence was officially declared on 28 July. San Martín arrived in Guayaquil on July 25, where he was enthusiastically greeted by Bolívar. However, the two men could not come to an agreement, despite their common goals and mutual respect, even when San Martín offered to serve under Bolívar. Both men had very different ideas about how to organize the governments of the countries that they had liberated. Bolívar was in favor of forming a series of republics in the newly independent nations, whereas San Martín preferred the European system of rule and wanted to put monarchies in place. The conference, consequently, was a failure, at least for San Martín. The conference between Simón Bolívar and José de San Martín. The real conference took place inside an office, and not in the countryside as the portrait suggests.
San Martín, after meeting with Bolívar for several hours on July 26, stayed for a banquet and ball given in his honor. Bolívar proposed a toast to “the two greatest men in South America: the general San Martín and myself” (Por los dos hombres más grandes de la América del Sud: el general San Martín y yo), whereas San Martín drank to “the prompt conclusion of the war, the organization of the different Republics of the continent and the health of the Liberator of Colombia (Por la pronta conclusión de la guerra; por la organización de las diferentes Repúblicas del continente y por la salud del Libertador de Colombia). The difference is clear from these toasts. After the conference, San Martín abdicated his powers in Peru and returned to Argentina.
San Martín married María de los Remedios de Escalada, a 14-year-old girl from one of the local wealthy families, she died in 1823, so he returned to Buenos Aires. He took his daughter Mercedes Tomasa, who was living with her mother's family, and both sailed to Europe .
In 1825 San Martin wrote the maxims for Merceditas, from where transmits it its principles. A list of twelve educational precepts with the title is maximum for my daughter, which are as follows. 1 Humanize the character and make it sensitive even with insects that are detrimental to us. Stern has said a fly opening the window so that it escapes: Anda, poor animal, the world is too big for both of us. 2 Inspire you to love the truth and hate to lie. 3 Inspire you great confidence and friendship, but coupled with respect. 4 Stimulate in Mercedes charity to the poor. 5. Respect on the property of others. 6 Get it to keep a secret. 7 Inspire feelings of indulgence towards all religions. 8 Sweetness with the servants, poor and old. 9.-Who speaks little and as precise. 10 Get it to be formal table. 11 Love of neatness and contempt to the luxury. 12 Inspire you love for the fatherland and freedom.
He was a modern man, a real mason and a honest man that tried to be himself.
The book is another history. We bought it in the fair several years ago. It was written by one of the witness of the interview Gerónimo Espejo. He born in a poor family in 1801 in Mendoza, had only a rudimentary education. In 1816 he joined as an infantryman to the Andes Army, fighting in the battles of Chacabuco and Maipu Cancharayada and participated in the two campaigns south of Chile. He participated in the campaign to Peru, where General San Martin was promoted to the rank of lieutenant and entrusted several special missions, especially just before making Lima. He joined San Martin to Guayaquil interview with Simon Bolivar. In 1868 he was employed in the office of payments of the Ministry of War. There he met President Bartolome Mitre, who was stunned by his memory for the historical events that had participated. After Mitre left office, he held long conversations with Espejo, who helped compile their testimonies in his books: "Historical Memory", "San Martin and Bolivar's interview Guayaquil" ,"The passage of the Andes".
This book is dedicated by the author to his friend Miguel Alejandro Araoz as a memory of friendship from his servant says in the upper part of the first page. This book is a treasure. It also has two litographies, the portraits and signatures of San Martin and Bolivar.

Narrative of the Life of Frederick ...
$25
See all