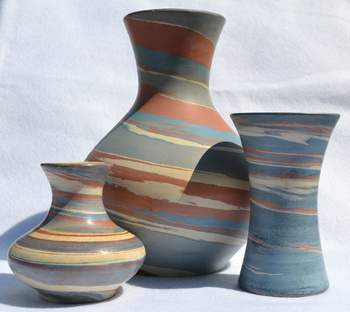 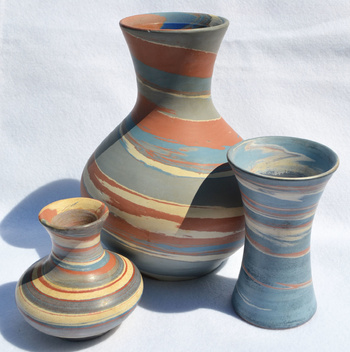 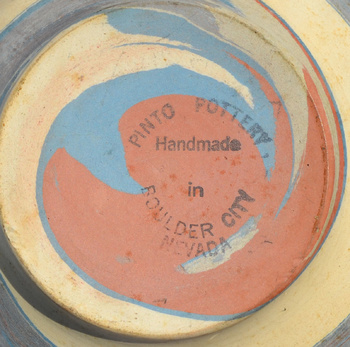 Pinto Pottery was the precursor to Desert Sands Pottery. It existed in Boulder City, Nevada beginning in 1946 and lasted only until 1949 when ownership was re-organized and the pottery was renamed Desert Sands.

Arthur Evans brought a long tradition of pottery making with him when he moved to Nevada, learning his craft as part of the Evans Pottery family of Dexter, Missouri. There is still some contention about the development of the blended clay process - most agree that it was first produced in America as commercial artware by Ouachita Pottery of Benton, Arkansas in the early 1900s - but it had been used by Evans Pottery for almost as long as used by Niloak, so it was natural that Arthur would continue the process in Nevada. It lent itself well to the new geography - Pinto Pottery was named for the local Pinto Mountain.

As far as I know, Pinto never glazed the exterior of their ware but often the interiors were glazed. Exterior glazing was a development that came about after they became Desert Sands.

There is a picture here of Arthur doing some finishing and his son Ferrell up to his elbows in wet clay - http://archive.library.nau.edu/cdm/ref/collection/cpa/id/5729