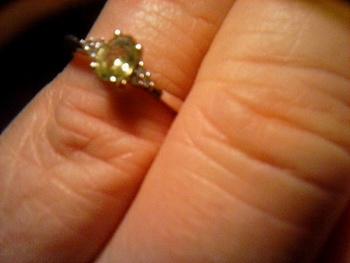 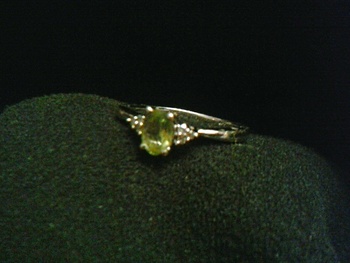 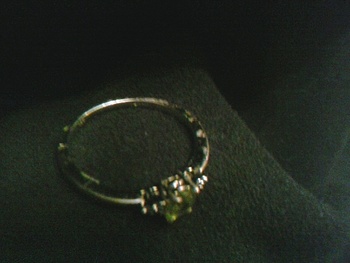 My Dad always goes out daily to do his shopping despite his RA and not being able to walk without his canes. I noticed this ring and a shiny penny next to his hat and car keys on the counter. I asked him ..." Hey Dad where did this come from ??" "Oh I found them in the parking lot at Marc's" he replied. He seemed more impressed to have found the shiny new penny ! I picked up the ring and looked inside the band..it was marked 10K. The oval center stone was pale green with three tiny clear stones in a triangle pattern on each side. There didn't seem to be any damage to the stones but the band had some scratches and nicks. Can't imagine it being stepped on or worse run over by a car and still not have been destroyed. I found out the center stone is a 1/2 carat Peridot with six tiny 0.03 carat Diamonds. Three on each side. Total weight 2 grams. It's very petite (barely fit's my little finger) either an engagement or promise ring judging from my online research. So it's worth maybe around a hundred dollars from the prices I've seen online, but I'll have to take it to the jeweler's to find out for sure. Sorry that someone lost this but....Great find Dad ! -Mike-

Peridot is the official birthstone for the month of August as adopted by the American National Association of Jewelers in 1912. It is also the stone for the Zodiac sign of Libra. Peridot may be given as a gem on the 16th wedding anniversary.
For as long as I can remember I have pronounced this gem as "pear-a-doe" and until recently believed this was correct. Someone took the time to write informing me that the correct pronunciation is actually per'i-dot so I have amended this page to hopefully educate others as well. However, it seems that pear-a-doe may have come into common usage as I found two dictionaries that offer both pronunciations.
Peridot is the gem variety of olivine and ranges between 6.5 and 7 on the Mohs scale of hardness.
Gem quality peridot comes from Arizona, Burma, Norway, islands in the Red Sea, Hawaii and is sometimes found in meteorites. It's been mined as a gemstone for thousands of years, and is mentioned in the Bible under the name of Chrysolite. Legend says that peridot was one of the favorite gemstones of Cleopatra and that some of the "emeralds" worn by her were actually peridot.

It is thought to bring the wearer good luck, peace, and success,. Its powers include health, protection, and sleep. The advantages of peridot are to attract love and calm anger while also soothing nerves and dispelling negative emotions. 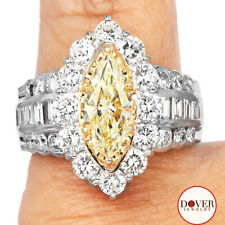