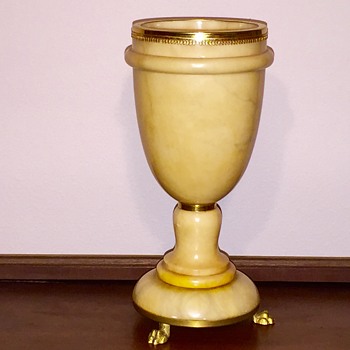 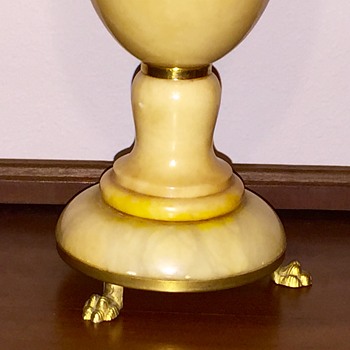 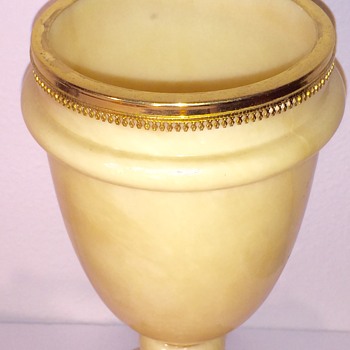 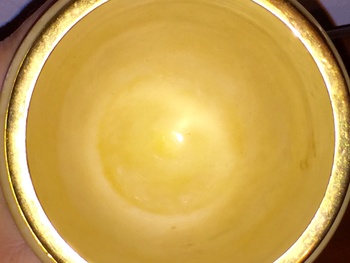 It's a 10" tall alabaster chalice with 3 gold lions paws that make a footed base with a gold retainer on top I thought was from the early 1900's.I was way off and so was the person I bought this from who must have just been guessing.I had to have a Jade sculpture authenticated,dated and appraised so I took this with me.The man that sold this to me was right about one thing it's Egyptian alabaster in a hard to naturally find butterscotch gold color but ii's much older than I could have ever imagined.It's nice to have experts in so many areas like there is on collectors weekly who are so glad to freely share there knowledge.I paid for this opinion but it was worth it so I'll share what I think is pertinent for other collectors.The biggest thing I came away with was how the expert was able to date this.He ran his hand in the bottom of the cup and showed me how it wasn't completely smooth and didn't even have the same degree of a evenly applied texture like the outside of the cup that's smooth.You can't tell unless you feel it.This cup was made using handmade tools.Several different kinds honing tools were used to get this shape.This in itself can be forged but it has a protruding ring toward the bottom 2" of the cup you have to feel to even know it's there you never see in modern chalices or forged cups that are advertised as antique but are shaped with electric tools.I also thought this was in 3 pieces and glued together but the cup and stem are one solid carved piece and the bottom that's close in color but isn't the same kind of alabaster has been glued on.He could date the one piece cup and stem at 250 to 600 years old.The base was added later and again here's where a expert can tell you things you never thought of.He said the bottom of the stem going to the base is platformed and this most likely wasn't made to be a useable drinking vessel but came off of another piece of alabaster that was most likely a statue of someone holding the cup or part of a inside structure.The strange smeared red mark on the bottom I couldn't figure out is most likely a auction stamp that now has a indiscernible number.And finally the only other thing of interest was the gold lions feet on the bottom are over 100 years old but the gold retainer on top has been replaced or added within the last 50 to 60 years.This guy was like a detective who looked at every aspect of this chalice not just the alabaster and was money well spent.