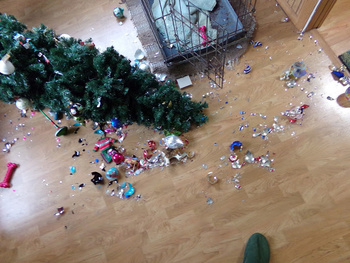 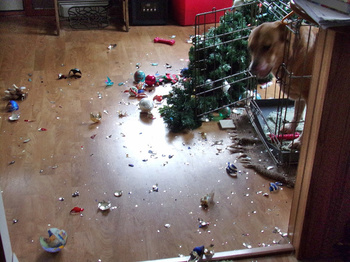 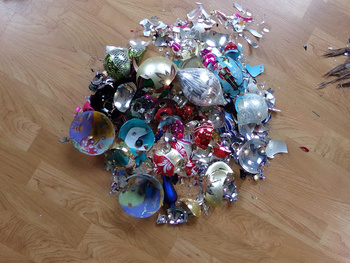 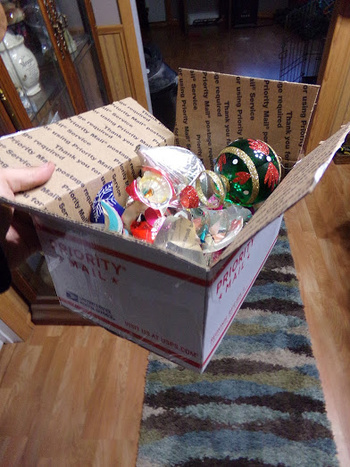 Background information: This occurred yesterday. Some of these ornaments had been in the family for generations. Some were gifts. Every year we also add more (glass) ornaments to the tree. Both my mom and I have Major Depressive Disorder.
-----------------

I had just been thinking, "I should probably take down the Christmas tree." It was still up because it was so pretty with all the colourful ornaments and its lights. I decided instead to take photos of some new additions from thrift stores earlier this week.

My dogs began barking as a large truck pulled into our driveway. It's hard not to hear a vehicle enter: People pull right in, down the middle, but the sunken-in ground near the street seems to have collapsed further and is filled with water and ice so you cannot see the enormus hole-- and, thus, you bottom-out your vehicle with squeals and crunches that sound very damaging.

I looked and noticed it was the Schwann's guy-- Schwann's is a frozen-food delivery service known for decent prices on decent foods. Striding to the door to greet him, as it's always the same, friendly man, he got out and handed me an ad.

"This year's new choices," he said, "Or at least for the next couple months."

I thanked him, and we shared a couple more sentences before I bid him a good day, and I began closing the door.

Suddenly, a series of crashes sounded. I slammed the door shut and began running up my steps, through the kitchen, and halted to an abrupt stop in the dining room threshold. My gaze beheld utmost horror: Glass, everywhere. In fact, my socked feet were even standing on it as it had slid all the way to the kitchen.

It had been Orangie, seen in photo two, as he's the window-jumper. He must have slid into the tree as he was trying to scare off the food guy. I shouted, "Orangieeeeee!" and he bolted to his cage-- the cage he has because he becomes violent at random and is destructive when unattended.

My camera was still on the dining room table. I grabbed it and snapped the photos shown. I tried to get my dogs to stay put, but they refused to listen and Rhoda ran right through all the pieces as she was terrified that she was going to be in trouble and that Orangie would try to hurt her as he does when upset.

Edging into my room, I grabbed the rubber-bottomed slippers I never use and retrieved the vacuum to create a safe path into the debris field.

It took me about 40 minutes of sweeping and vacuuming 3 rooms and ventilation to get all of the reflective pieces of danger out.

I was running late for college. As I quickly finished up and had my car warming up, my mom came home (thus putting an end to wondering when and how I should tell her that day). I immediately notified her that I was running late and that almost all of the glass ornaments had been destroyed.

She looked horrified. As she stood on the steps, I told her what had happened.

"They were my only legacy left to give you," she despaired. "I babied those for years. They safely made it from state to state with me. Some of them were at least 120 years old and had come over from Germany."

I was trying to not get depressed about the loss of several generations of family history, so I looked at her and shrugged. "I cannot replace the family history in them. I can find similar pieces, but they're gone."
There was just nothing left of the oldest. It was as if they had vaporised. In fact, my last sweeping turned up a handful of powdered glass. They just disintegrated on impact.

She then added, "You won't believe me, but I had a dark, sinking feeling about an hour ago."

By now we were in the living room. She looked at the tree and asked, "Is anything left?" I told her the depressing news: of all the antique ornaments, only 2 plain, newer (1900s) ones were left. Of the 6 vintage ones I got her for Christmas, only 2 were left. Of several more modern ornaments (1990s-last year) that were gifts, hand-painted, or just really nice, almost all were destroyed.

You can see the box I put the pieces in.

She yelled at the dog and told me to take him outside, as she didn't want to see him, and she became depressed for the evening. When I got home later, I heard her say to the dog who has already caused over $2,000 of property damage, "You broke my heart, Orangie. You really broke my heart."

Some of the ornaments were just really neat. You could see where they broke them off the blowpipe and what some were rolled in. Others were painted, with sand or mica sprinkled onto adhesives applied in patterns with a brush.

My mom really loved those. Much of our family history has been stolen or destroyed. There is very little left from before my grandparents now. Only 3 things come to mind.

A depressing story. I'll be purchasing similar pieces off e-Bay over the next year, but I'm not sure if my mom will like them or not as they are not what was lost. 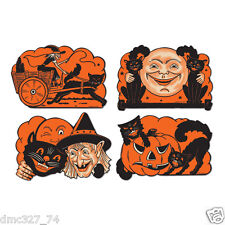 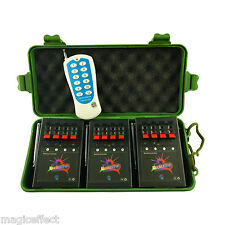